Lawmakers in Wisconsin and elsewhere are seeking to eliminate collective bargaining rights for public school employees as a means of controlling runaway spending (it has tripled in real terms since 1970, despite stagnation or decline in student achievement at the end of high school--see the last chart in this post). But even if collective bargaining is forbidden to state school employees, the savings will likely be negligible.

Surprising as it may seem, that conclusion follows directly from the research on school employee unions, which I reviewed last year for the Cato Journal. Differences in spending between school districts with and without collective bargaining are modest to non-existent. Does this mean that the unions are impotent and that their members have been wasting their $600 annual dues payments? Not quite.

Though employee compensation varies little from one school district to the next, based on the presence or absence of collective bargaining, public school employees enjoy far better compensation than their private sector counterparts. The combined salary and retirement benefits of public school teachers are 42 percent larger than those of private school teachers (see link above).

Public school employees win this generous compensation premium through political action backed by monumental campaign contributions. Democrats receive the overwhelming share of these contributions (93% from the NEA; 99% from the AFT, see Cato Journal link), but many Republican lawmakers are also swayed, fearful that the unions will finance their primary opponents the next time they face voters.

To further increase their clout, union leaders have sought to grow their membership. More members mean more dues revenue with which to influence legislators. In this regard, too, they have been enormously successful: the number of public school employees has grown ten times faster than the number of students for two generations—a major factor in the system’s exploding cost and collapsing productivity (see figure below). 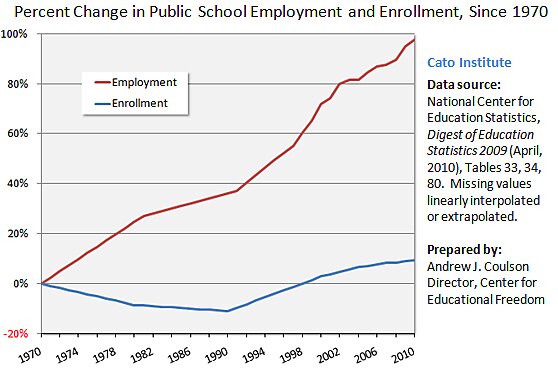 Public school employees clearly understand that union membership has benefitted them handsomely in both compensation and job security. Over the past forty years, union membership as a share of the public school workforce has increased from 42 percent to 70 percent. Even if collective bargaining were eliminated tomorrow, school employees would have every reason to continue funding the self-interested political action that has served them so well in the past.

So what would provide a counterbalance to unsustainable union demands?

To find the answer, it helps to know that while union membership was rising in the public sector it was falling steadily in the private sector—to just 6.9 percent of the workforce in 2010 (see figure below). The reason is simple: when a business makes excessive concessions to a union and is thereby forced to raise prices above those of its competitors, it loses customers. As it loses customers, it lays off workers. If this situation continues, the business fails. Private sector unionization is thus self-regulating to a significant degree.

Public school employee unions, by contrast, have no direct competitors. They cannot drive their employer out of business because there is only one employer in the sector and its existence is mandated by law. The only real solution to the spiraling cost of our state school monopolies is thus to open them up to private sector competition, so that both parents and taxpayers have an alternative to the no-longer-affordable status quo.

There are several ways of doing this, of which education tax credits seem the most promising. In Florida, Arizona and other states, taxpayers can claim a dollar-for-dollar credit for donations to non-profit scholarship organizations. These organizations, in turn, subsidize private school tuition for low-income families. In Illinois and Iowa, families who pay for their own children’s education are eligible for tax credits to directly offset part of the cost.

Though most of these programs currently impose tight caps on the total value of credits available, they are already generating substantial savings to taxpayers while simultaneously expanding the choices available to families. Florida’s k-12 scholarship donation credit saves taxpayers $1.49 for every dollar it reduces state revenue, and the new private sector competition has improved achievement in public schools.

So while curtailing collective bargaining won’t rein in out-of-control spending, introducing real private sector competition will. And as the final figure reveals, we have got to get spending under control....

Update: I should add that, as NRO’s Rich Lowry notes, the plan for the state to stop garnishing public school employees’ wages and sending the money to the union is highly commendable. If employees want to pay union dues, they should be free to do so, but the choice should be theirs.  Of course, since public school employees benefit very handsomely from the status quo monopoly (see below), it’s likely that most will continue to pay voluntarily for the lobbying and political contributions that will preserve their above-market compensation. So it’s still the case that introducing private sector competition is the best way to control education costs.