A Dishonest Budget, as Told in One Graph

Yesterday, President Barack Obama released his proposed budget for fiscal year 2012. Many of my Cato colleagues have already discussed why the president should be embarrassed of this document. Chris Preble writes that the president offers “faux cuts” to military spending. Dan Mitchell says the president is “missing in action” on entitlement reform. Chris Edwards writes that “the Obama administration has completely chickened out on spending reforms in its new budget.”


They were too kind. This budget is thoroughly dishonest, too.


Back in 1997, Congress enacted automatic reductions in the price controls that Medicare uses to pay for physician services. Congress has delayed those cuts year after year, and everyone now agrees they are politically infeasible. We’re not talking about your the usual, Washington‐​DC definition of spending cuts here, which is just a reduction in spending growth. If the accumulated cuts were to take effect in 2012, as provided by current law, Medicare payments to physicians would fall by some 25 percent, and lots of seniors would find their doctor no longer accepts their Medicare coverage. The problem is, these cuts are still on the books and they grow larger every time Congress delays them. But no one wants to come up with the money needed to pay for a permanent “doc fix.”


Enter President Obama’s FY2012 budget submission. Rather than propose a permanent “doc fix,” the Obama administration proposes a temporary and dishonest one. As shown by the blue bars in the below graph, the administration proposes to delay these cuts until 2014 at a cost of $54 billion. As shown by the black line, the administration proposes to pay for this additional spending by reducing the rate of spending growth in other areas of Medicare by $62 billion over the next 10 years. Note that only 6 percent of these Medicare “cuts” will occur in 2012 and 2013. The other 94 percent of the “cuts” will come after the administration has spent the $54 billion it wants to spend. Note also that the vast majority of the “cuts” would take effect after Barack Obama is no longer president. Finally, the president offers no proposals to deal with the cuts in physician payments during the last eight years of the 10‐​year budget window (as shown by the purple bars). But he’s more than happy to use those implausibly low current‐​law spending levels to make his proposed budget appear more responsible than it is. 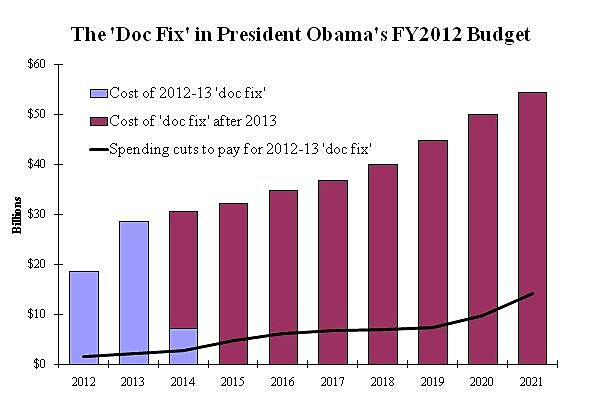 
Both parties engage in such dishonesty all the time. Those cuts in physician payments were scheduled to take effect in 2011. To pay for delaying them until 2012, Congress and the president agreed on the ridiculous and dishonest strategy of trying to track down and recover excessive subsidies that the federal government will pay to people in ObamaCare’s health insurance “exchanges,” beginning in 2014. (Call it the new “pay and chase.”)