A week ago, the Atlanta Journal Constitution published an on-line op-ed critiquing Chile's nationwide public-and-private school choice program. In a letter to the editor, I objected to several of the op-ed's central claims. The authors responded, and the AJC has now published the entire exchange. A follow-up is warranted, which I offer here:

Comment on the Gaete, Jones response to my critique:

Their response consists chiefly of “moving the goalposts”—changing the issue under debate rather than responding to the critique of the original point. The first claim in their original op-ed to which I objected was that “there is no clear evidence that [Chilean] students have significantly improved their performance on standardized tests.” In contradiction of this claim I cited the study “Achievement Growth” by top education economists and political scientists from Harvard and Stanford Universities. That study discovered that Chile is one of the fastest-improving nations in the world on international tests such as PISA and TIMSS—which were specifically designed to allow the observation of national trends over time. It is hard to conceive of clearer evidence that Chilean students “have significantly improved their performance”, contrary to the claim of Gaete and Jones.

To the extent that Gaete and Jones address this evidence at all it is by saying: “it is true that Chile has shown a certain improvement in [its] relative position in PISA scores. But (1) this may say less about Chilean improvements and more about other countries’ relapse.” That is an empirically testable claim. It has been tested, and it is false. As I pointed out in my original letter, prof. Gregory Elacqua has shown that the same pattern of improvement in academic performance is visible on Chile’s own national SIMCE test, which is entirely unaffected by the performance of foreign nations (see chart 1). Moreover, the improvement in Chilean academic achievement noted in the "Achievement Growth" study is not purely relative to other countries but is an objective gain compared to Chile's own earlier performance. 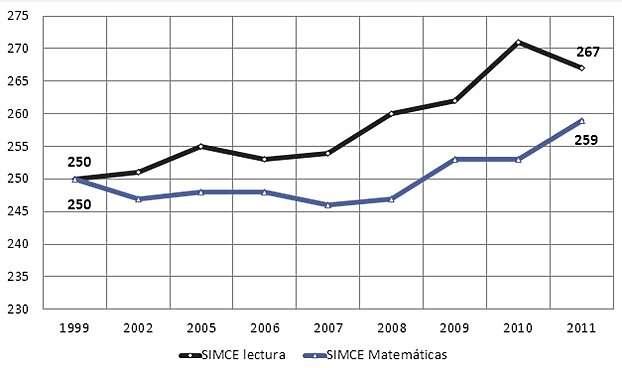 Even if that were not the case and Chile were only improving relative to the entire rest of the world because the whole rest of the world was suffering a decline, it would beg the question: what is Chile’s secret that is allowing it to buck this worldwide slump? Certainly it would be wrong to dismiss Chile’s education system out of hand as part of the explanation.

But rather than spending much time trying to dispute this evidence that contradicts their original claim, the authors try to change the subject, proposing that “testing is neither the only nor the best way or criterion to determine the quality of an educational system, it is simply the way favoured by market-oriented systems.” It was also, recall, the very first way in which Gaete and Jones themselves proposed to evaluate Chilean education in their op-ed, with their mistaken claim about a lack of test score improvement. But rather than seriously confronting the evidence that refutes them, the authors choose to change the subject, asserting that: “there are no big differences between the private and public system in the [domestic Chilean] SIMCE [test].” This new claim is entirely beside their original point, which was the trend in academic performance for the nation’s students as a whole.

But, having addressed the authors’ original claim, I have no objection to addressing this new one. The effects of a competitive education system are not limited to—or even chiefly comprised by—differences in performance between the sectors. One the contrary, it is the overall performance of all schools and children that is of interest. Alas, Gaete and Jones seem unaware that increased competition from private voucher schools improves the performance of nearby government schools. This has been shown empirically by Francisco Gallego in his study “When does Inter-School Competition Matter? Evidence from the Chilean `Voucher' System.”

Next, Gaete and Jones attack Chile’s education system on the grounds that it suffers from an educational gap between its wealthier and poorer students. That it does, but so do other nations. It is more meaningful to ask how Chile compares in this respect to its peer Latin American nations. Inequality can be measured using several different metrics, one of which is to look at differences in test scores between wealthier and poorer students. These results vary somewhat by subject, grade, and test, but as an example we can look at the PISA test of reading among 15-year-olds. Here, Chile’s achievement gap is statistically indistinguishable from the overall average of all participating countries and significantly smaller than the gaps in most other Latin American countries. Chile’s achievement gap is also significantly smaller than the gaps in the United States, France, Belgium, and several other rich nations ("PISA 2009 Results: Learning to Learn," Vol. III, Table III A, 2010).

Another way of measuring educational inequality is the average number of years of schooling completed by the wealthiest versus the poorest students. On this point, professor Claudio Sapelli summarizes the evidence for El Mercurio: “Chile has the lowest average educational inequality in Latin America. To measure inequality using the education gap between quintile 5 (richest) and 1 (poorest). In terms of change in this gap in the last 20 years, Chile is among the few countries in Latin America to decrease it.” So, here again, the data on Chile’s education system seem encouraging.

Looking beyond the education system to the broader economy, income inequality has also been falling in recent decades, as has poverty. “The fraction of the population living under the poverty line in Chile fell from 45.1% to 13.7% between 1987 and 2006” (Eberhard & Engel, 2008). Meanwhile, “from 1990 onwards the wage of the 10th percentile [poorest] and the median wage [middle class] grew faster than [that of the] the 90th percentile [the wealthy]” (Eberhard & Engel, 2008).

As for public sentiment toward the program, to which Gaete and Jones make reference, I leave explaining that to the political scientists and sociologists.