Did the New Deal ‘Help’?

While Barack Obama's economics team hammers out its $800 billion fiscal stimulus plan, the commentariat is battling over the effectiveness of what some consider the prototype stimulus package, the New Deal.* The suppressed (and problematic) conclusion to all this punditry seems to be: Because government spending under the New Deal helped/didn't help to end the Great Depression, the Obama stimulus plan will/won't help to end the current recession.

One of the opening salvos was this exchange between George Will (anti-New Deal) and Paul Krugman (pro). More recently, New York Times editorial board member Adam Cohen (pro) wrote this column, responding to an op-ed by former Business Week bureau chief Andrew Wilson (anti) in the Wall Street Journal.

So who's right? Did New Deal government spending "help," as Cohen puts it?

To answer that, we first have to define Cohen's term — what would it mean to say that government spending under the New Deal "helped"? Two possibilities come to mind:

The first sense considers the New Deal as a stimulus program to revive the economy; the second considers it as a welfare program to aid the poor. The two notions are far from equivalent. My reading of the literature suggests that the New Deal did little as an economic stimulus, but it did provide welfare benefits.

The figure below sketches U.S. GDP and government spending (all levels) for the Great Depression era. The wildly fluctuating GDP line clearly marks the Great Contraction of 1929-1932, the Recession within the Depression of 1937–1938, and the return of GDP to pre-crash levels in 1940. In contrast, government spending has only a very mild upward slope over the period (until the 1941 ramping-up for World War II). In 1930, the second year of Herbert Hoover's administration, government spending totaled $10 billion; at the height of the New Deal spending boom in 1936, government spending reached $13.1 billion. (In comparison, that rate of government spending growth is just below the average for the entire post-WWII era.) This raises the question of whether there was much New Deal fiscal stimulus at all. 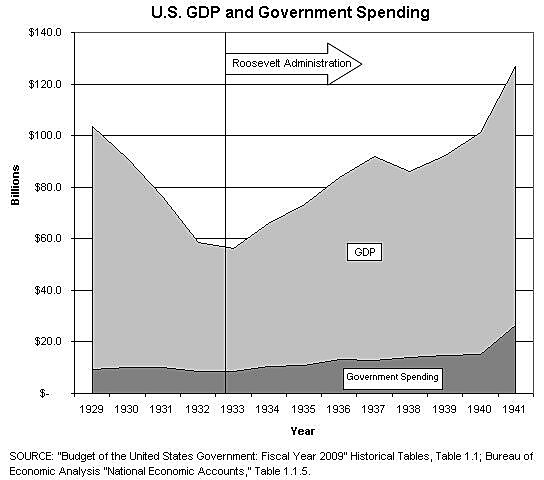 We get a somewhat different view if we consider the federal budget surplus/deficit. Much of the benefit of fiscal stimulus is supposed to come from the fact that it's deficit spending. In essence, government borrowing moves future consumption to the present and hopefully boosts the economy to a permanently higher level. As the figure below shows, the federal government dramatically ramped up deficit spending in the last year of Hoover's administration, as tax receipts sagged and Hoover enacted his own emergency programs. FDR continued the borrowing to fund components of the New Deal. 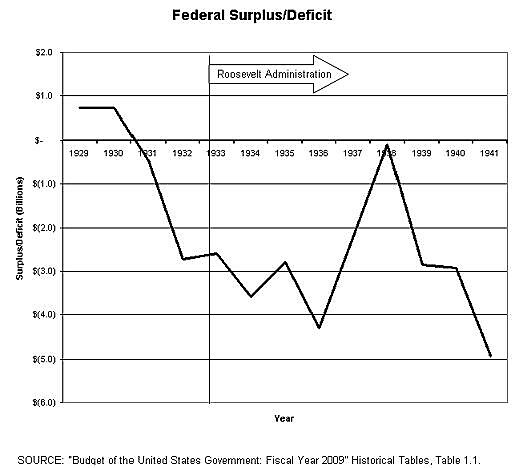 However, this borrowing was not dramatic by today's standards. As a share of GDP, the New Deal deficit peaked at 5.4 percent of GDP ($3.6 billion) in 1934; in dollar terms, it peaked at $5.1 billion (4.3 percent of GDP) in 1936. In contrast, President-elect Obama recently announced that he expects "trillion-dollar deficits for years to come," even without the $800 billion stimulus package that his administration is preparing. With a U.S. GDP of roughly $13.8 trillion, the Obama-projected deficit (not counting the stimulus package) represents 7.2 percent of GDP.

Does the New Deal experience thus suggest that, when it comes to fiscal stimulus, just a little bit can have large effects? Interestingly, economic research suggests the opposite. Long before she was named chair of Obama's Council of Economic Advisers, Christina Romer wrote a short paper for the Journal of Economic History titled "What Ended the Great Depression?" The paper provides empirical evidence that FDR's fiscal policy provided little stimulus during the Great Depression. As shown in the figure below (reproduced from Romer's article), the results of the New Deal's fiscal stimulus (solid line) were little different from what she projects would have resulted from "normal fiscal policy" (dotted line). Both the deficit spending and the multiplier effect from that spending were too small to budge GDP. 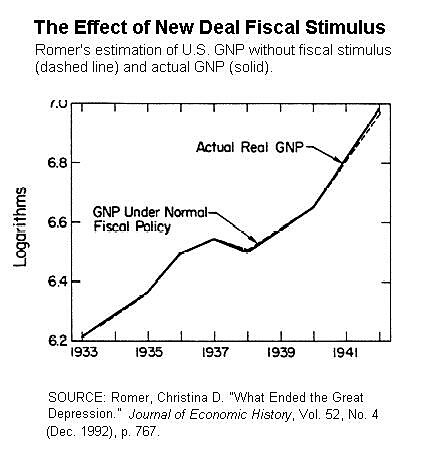 What did end the Great Depression? Romer argues that another FDR policy — doubling the fixed exchange rate for the dollar relative to gold — did the trick, though the New Dealers seem to have lucked into that result rather than planned it. The rate change worked as a monetary stimulus, inducing large gold flows into the United States, where they could now buy twice as many dollars. That buttressed bank deposits and increased bank willingness to lend, encouraging investment. The lending resulted in a sharp increase in the money supply, pushing against the Depression's price deflation and encouraging consumption. From the moment the exchange rate changed, the United States began to climb out of the Depression — albeit slowly; more slowly than many other countries.

Romer's explanation dovetails with Milton Friedman and Anna Schwartz's work on the root cause of the Depression: the Federal Reserve's sharp reduction of the money supply in the late 1920s, in order to moderate the stock market boom and return the United States to the pre-WWI dollar-gold exchange rate. It also dovetails with evidence that other nations' recoveries from the Great Contraction began soon after they abandoned efforts to return their currencies to pre-war gold exchange rates. My reading of the economic literature indicates that the "monetary policy did it" thesis has been generally accepted by economic historians (contra Cohen's graf 9).

So it was FDR's monetary policy that ended the Great Depression, not such New Deal initiatives as the WPA, the CCC, NIRA, and the rest of the alphabet soup. This follows the findings of a later paper that Romer co-authored with husband David Romer on U.S. recessions in the post-WWII era, which found that monetary stimulus proved superior to discretionary fiscal stimulus in restoring the economy.

What, then, to make of our warring pundits? In the fight between Krugman and Will over the stimulatory effects of the New Deal, it seems that opposing sides can both be wrong. Will was incorrect to argue that economic conditions grew worse during the New Deal era — conditions did improve, albeit slowly, and were temporarily reversed by the Recession within the Depression. Krugman, on the other hand, was wrong to argue that FDR's fiscal stimulus helped to remedy the Depression and that only the large fiscal stimulus of WWII ended the Depression — in fact, GDP had returned to pre-Crash trend (as calculated by Romer) by 1940. And both mischaracterize the 1937–1938 Recession in the Depression. Although federal deficit spending did decrease along with the economy, the recession appears to have been largely the product of onerous new banking regulations that weakened the monetary stimulus (a point that today's eager-to-regulate Congress should bear in mind).

Concerning Wilson and Cohen, Wilson goes too far in claiming that FDR (and Hoover) "were jointly responsible for turning a panic into the worst depression of modern times." If anyone merits that distinction, it is the Federal Reserve for its pre-Crash contractionary monetary policy. Cohen is wrong to claim that "as a matter of economics ... F.D.R's spending programs did help the economy." However, he does have a point that the various New Deal jobs programs provided income for many people who would have otherwise been destitute. As indicated in the figure below, at their height, the programs provided "emergency jobs" to just over 40 percent of laborers who likely would have otherwise been jobless. As state unemployment insurance and federal safety net programs largely did not exist at the time of the Crash, the New Deal jobs programs were likely a godsend for those who got the jobs (though they did little for the millions more who didn't). Today, however, several government programs provide income and other benefits to the jobless and the poor, so the welfare benefits of the New Deal do not need to be replicated.

Where does all of this leave us in evaluating policy responses to the current recession?

First, the economic history of the New Deal and the rest of the 20th century raises serious doubts about the effectiveness of discretionary fiscal stimulus packages in reversing an economic downturn. Monetary stimulus has a far better track record (which is not to say that we shouldn't have concerns about such policy — but that is a discussion for another blog post). And though there is no longer a fixed gold exchange rate for the dollar and the Fed has dropped nominal short-term interest rates to near zero, the Fed has other monetary weapons that it can use to fight this recession. Second, the helpful welfare benefits of the New Deal are now carried out automatically by other government programs.

This leaves us with an important question that has so far gone unasked by the commentariat: Given the above, is $800 billion in new government deficit spending worthwhile?

* As Tyler Cowen points out, it's wrong to think of the New Deal as a comprehensive, unified set of fiscal initiatives; FDR tried many different policies, and sometimes changed approaches, to fight the Depression.