With the one‐​year anniversary of the Dodd‐​Frank Act approaching, it seems a reasonable time to ask if the Act achieved one of its primary stated goals: ending the too‐​big‐​to‐​fail status of our largest banks. After all, we are beyond the financial panic and the Act has had a year to work.


Now one could simply ask, what does the law say? Well, to give its proponents some due, Dodd‐​Frank does suggest in a few sections that large banks, or other companies, will not be rescued. But then previous laws also said that Fannie Mae and Freddie Mac wouldn’t be rescued either. So much for the letter of the law. And of course there are various holes in Dodd‐​Frank that do allow bondholders to be rescued. Section 204 is very clear that the FDIC can buy the outstanding debt of a failing firm. If they buy such debt at par, then that sounds like a bailout to me. 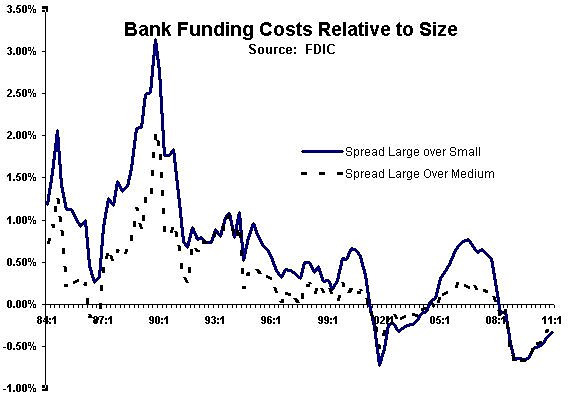 Ultimately the success of Dodd‐​Frank will depend upon whether the law convinces market participants that bailouts are over. For if they believe otherwise, the largest firms will be able to borrow at cheaper rates and grow at the expense of their rivals, becoming even more “too‐​big‐​to‐​fail”. Just look at the history of Fannie Mae to see how this could play out.


So what do the debt markets say (if they could speak)? The accompanying chart shows the difference between funding costs for the largest banks ($10 billion plus) and the smallest ($100 million and less), the dotted line shows the same relationship for the largest over mid‐​sized banks, to help determine how much of this advantage might be driven by economies of scale.


First one of the more interesting facts: historically the largest banks have had to pay more for borrowing, an average of 61 basis points more, over the last 30 years. During the financial crisis and even since the passage of Dodd‐​Frank, that relationship was turned on its head and the largest banks enjoyed a funding advantage, currently around 30 basis points. These numbers may sound small but an advantage of around 30 bp allowed Fannie and Freddie to basically take over the mortgage market.


Despite whatever Dodd‐​Frank intended, the debt markets are speaking pretty loudly: too‐​big‐​to‐​fail is still with us.