Did Canada Steal Our Tenth Amendment?

Under the U.S. Constitution, the federal government was assigned specific limited powers, and most government functions were left to the states. To ensure that people understood the limits on federal power, the Framers added the Tenth Amendment: “The powers not delegated to the United States by the Constitution, nor prohibited by it to the States, are reserved to the States respectively, or to the people.” Those delegated powers are “few and defined,” noted James Madison.


But the Tenth Amendment has disappeared. No one has seen it in recent decades. But I’ve found some statistics that make me very suspicious that the Canadians stole the Tenth. Look at the pie charts below. The top pie shows that 71 percent of total government spending in the United States is federal, while 29 percent is state/​local. (See BEA tables 3.1, 3.2, 3.3 for 2010 data). 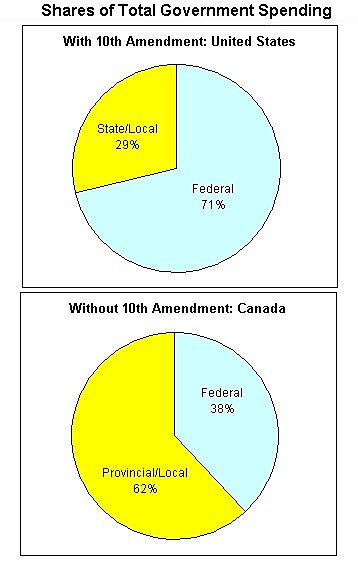 Actually, the real culprit for the missing Tenth is not the Canadians, but the U.S. Congress. In recent decades, Congress has undertaken many activities that were traditionally reserved to state and local governments. A primary method has been through “grants‐​in‐​aid.” These are federal subsidies combined with regulatory controls that micromanage state and local affairs. In United States, federal grants are about 4.1 percent of GDP (in fiscal 2011), while in Canada they are about 3.3 percent of GDP.


Even more striking: while we’ve got a complex mess of more than 1,000 state grant programs, Canada seems to have just a handful, and they are simple block grants. As I understand it, Canada’s federal grants to lower governments mainly just include:

There is a smattering of other aid, but that’s just about it. There are no federal subsidies for K-12 education in Canada, for example. There are a few large block grants and not much else.


On October 27, I’m on an Urban/​Brookings panel looking at “What Can the United States Learn from Canada.” Perhaps we can learn how to get our decentralized federation back. While we’re at it, we could get some tips on how to cut government spending, as the Canadians did in the 1990s.