Debt Deal to Slow the Economy?

The Washington Post reports that spending cuts in the budget deal threaten to slow the economy. The article quotes a number of economists who seem to harbor a rather extreme Keynesian bias in their thinking.

The deal would cut discretionary spending by just $21 billion in 2012, or just 0.6 percent of total federal spending that year. And that’s after federal spending has risen 22 percent since 2008 ($2.98 trillion in 2008 to about $3.63 trillion this year). Even if you believe that government spending helps the economy, it seems rather bizarre to claim that a 0.6 percent retrenchment after a 22 percent increase would hurt.

In fiscal 2012, we’ve got even more “stimulus” coming, with a projected federal deficit of about $1.1 trillion, per the CBO March baseline. So a spending cut of $21 billion will reduce the giant Keynesian stimulus in 2012 by just 2 percent. And yet the Washington Post says that this will “endanger the anemic economic recovery,” according to “many economists.”

Those “many economists” who believe in Keynesianism might be more believable if their theories hadn’t so obviously failed in recent years. Despite the enormous deficit-spending “stimulus” of recent years shown in the chart, U.S. unemployment remains stuck at high levels and the recovery is the slowest since World War II by numerous measures. (See cites in my testimony here.) 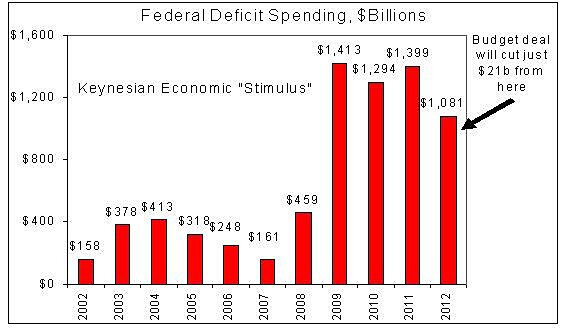