Dartmouth Withstands the NYT, but the Left Cannot Withstand Dartmouth

Research by scholars at Dartmouth Medical School suggests that Americans waste gobs of money on medical care.  Last week, The New York Times ran a fairly lame critique of the Dartmouth research, by Reed Abelson and Gardiner Harris.  Kate Steadman of Kaiser Health News provides a good synopsis of expert reaction to the story and writes, "Conservative and libertarian health policy bloggers were largely silent, ignoring the debate."  Although this libertarian wasn't exactly ignoring the debate, the categorization is largely fair.  More about that in a moment.

Abelson and Harris's portrayal of the Dartmouth research is completely at odds with my understanding of that research. 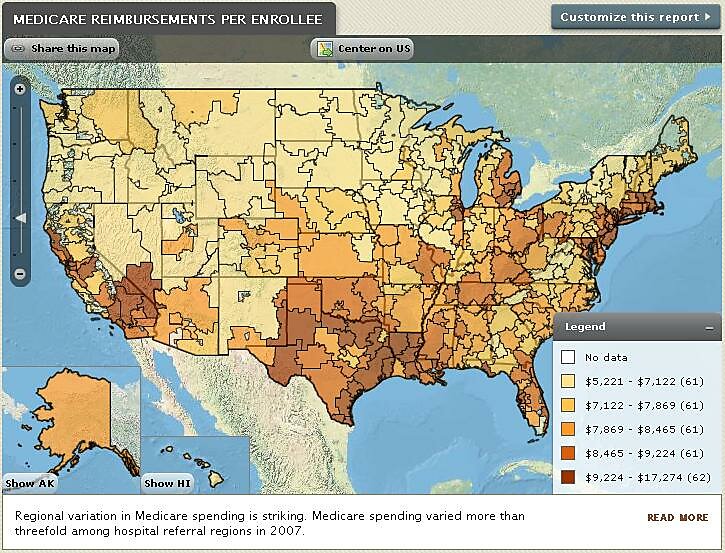 Decades ago, Dartmouth researchers stumbled across what may be the best method of detecting wasteful spending in an economic sector as complicated as medicine.  They noticed that patients in some areas consume a lot more medical care than patients in other areas — more office visits (to specialists in particular), more diagnostic tests, more procedures, more hospitalizations, et cetera.  And they began to question whether the patients who consume more care actually benefit from that additional care.  They have therefore spent the past few decades measuring both geographic variation in medical consumption, as well as any benefits for which they can find data.  Do patients in high-spending areas start out sicker than patients in low-spending areas? Do they end up healthier?  Are they more satisfied with their care?  My sense is that the Dartmouth researchers are scientists trying to capture the empirical reality of America's health care sector.  They have been doing this for a long time, they are very good at it, and they consistently find that a lot of the medical care that Medicare patients consume appears to provide no value.

That finding has drawn intense criticism, not least from health care providers in high-spending areas, whose resource use it calls into question.  Dartmouth researchers have tried to address those criticisms by approaching the issue from whatever angles the data will allow.

These various strategies consistently show that a large share of medical spending cannot be explained by either patient preferences or better health outcomes.  Indeed, they have even found that higher spending often correlates to lower-quality care.  These findings suggest that perhaps one-third of U.S. health care spending — which amounts to about $700 billion per year, or 5 percent of U.S. GDP — is not making patients any healthier or happier.

These research strategies are not perfect, either individually or in the aggregate, because the data are imperfect and medicine is extraordinarily complex.  (If this stuff could be measured perfectly, it wouldn't be medicine.)  Furthermore, even if the Dartmouth studies fully controlled for health status and patient preferences, their findings would not prove that all the extra money is being wasted. It may be, for example, that the additional money spent in high-spending areas generates new knowledge that helps save lives  in low-spending areas too.

Nevertheless, this central finding has held up to many different research strategies.  The Dartmouth crowd has produced a sizable and credible body of research that suggests as much as one third of U.S. health care spending — roughly the annual economic output of South Carolina — is little more than a wealth transfer from taxpayers and premium-payers to health care providers and medical suppliers.

Given all this, it was bizarre to see Abelson and Harris claim, "Measures of the quality of care are not part of the formula" (which is untrue), and "Neither patients’ health nor differences in prices are fully considered by the Dartmouth Atlas" (the presence of "fully" makes this claim merely unfair and misleading).  I agree with my left-leaning friends.  This was shoddy journalism.

I have seen only one conservative comment on the Abelson-Harris story.  Since OMB director Peter Orszag invokes the Dartmouth data in his argument for ObamaCare, my conservative friend celebrated Abelson and Harris's attack on those data.

My conservative friend is in error — but so is Orszag.  As I wrote above, the Dartmouth folks are merely trying to capture what is happening in the world that surrounds us.  So long as the Dartmouth research holds up to scrutiny, advocates of free-market health care reform should embrace it, for two reasons. First, embracing reality is generally a good idea.  Second, the Dartmouth research makes the case for free-market reforms, and against the Obama-Orszag agenda.  The Dartmouth Atlas focuses almost exclusively on the Medicare program, where economists of all stripes acknowledge that government-imposed price and exchange controls, coupled with a lack of patient cost-consciousness, are the driving forces behind persistent excessive spending and a lack of focus on value. (Dartmouth researchers opaquely refer to Medicare’s fee-for-service price and exchange controls as “the current reimbursement system.”) These are not products of the free market.  The wasteful health care spending identified by Dartmouth researchers must be laid squarely at the feet of the Left — or as I affectionately call them, the Church of Universal Coverage.

My conservative friend(s) would do better to respond that a free market can reduce unwarranted variation in health care spending, while government can't — not in Medicare, and not even in the Veterans Health Administration.