In just about every election, local governments put measures on their ballots asking voters to allow the sale of bonds so that municipalities can finance roads, schools or other projects. Interested parties often form campaigns to help pass or crush these initiatives.

And sometimes the investment banks that donate to those campaigns get hired to sell the bonds to investors after an initiative passes, raising the possibility that they got a leg up in the selection process because of their monetary support for the ballot bond measure — not because they offered taxpayers the best deal.

…[A] review by the Bond Buyer publication ... found "a nearly perfect correlation between broker-dealer contributions to California school bond efforts in 2010 and their underwriting subsequent bond sales."

...Jay Goldstone, [the] Municipal Securities Ruling Board’s chairman, said he’s concerned about the pattern. "There seems to be a strong relationship between contributions and underwriting business."

The article discusses solving these problems with greater disclosure and transparency. But the real solution is to eliminate the underlying government preference that creates the influence peddling in the first place.

In this case, the federal income tax exemption for state and local bond interest should be repealed. That could be matched with a reduction in general tax rates on capital income.

As I argue here, state and local governments should dramatically scale back bond issuance. Bonds are just sneaky tax increases. State and local capital investments should be financed “pay-as-you-go,” which would cut out the costly middlemen in the finance industry.

The chart below shows that state and local bond debt has soared to more than $3 trillion. That not only represents a huge deferred tax increase, but it has also created a large playing field for special-interest cronyism. (For chart info, see here). 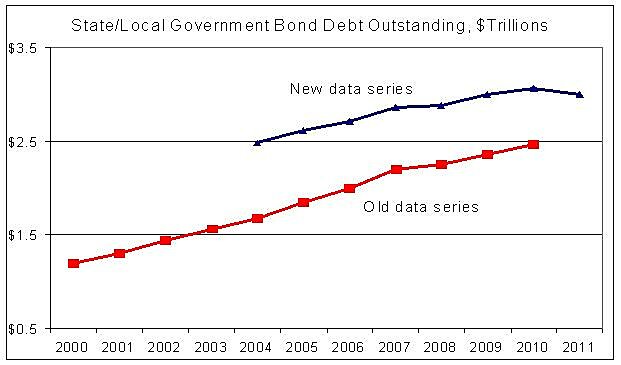