When I testified to the Joint Economic Committee yesterday, the subject of bridges came up again and again. Numerous people said or implied that our bridges are crumbling and falling down, and that more funding was desperately needed.

The problem with that narrative is that the number of bridges that are in bad shape has been falling steadily over time. The nation’s bridges appear to be in better condition than ever, as indicated by data from the Federal Highway Administration. The FHWA’s inventory of bridges identifies those that are “structurally deficit” and “functionally obsolete.” Definitions for those terms are here.

The chart shows that the share of the 100,000+ bridges in the National Highway System that are either S.D. or F.O. has declined steadily since 1992.  (Hat tips: Randal O’Toole and Matt Fay) 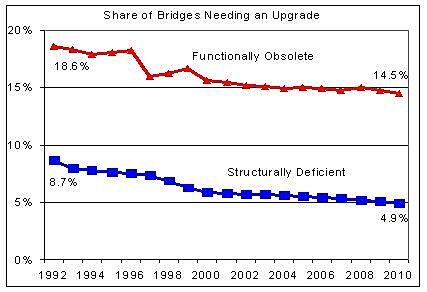