A Wall Street Journal story today begins “America’s road to recovery may face a costly detour due to a fraying transportation network. One in nine of the country’s 607,380 bridges are structurally deficient …”

Newspapers have been full of such infrastructure stories in recent years. Pro-spending lobby groups such as ASCE have certainly pumped-up public concerns. America’s highways are becoming more congested, and we should have a discussion about how to finance needed expansions in capacity.

But the popular “crumbling bridges” theme is a bit of a scam. Federal Highway Administration (FHWA) data does show that one in nine bridges are structurally deficient. However, the WSJ doesn’t tell its readers that the share of bridges that are deficient has been steadily declining for two decades, as the chart below reveals. 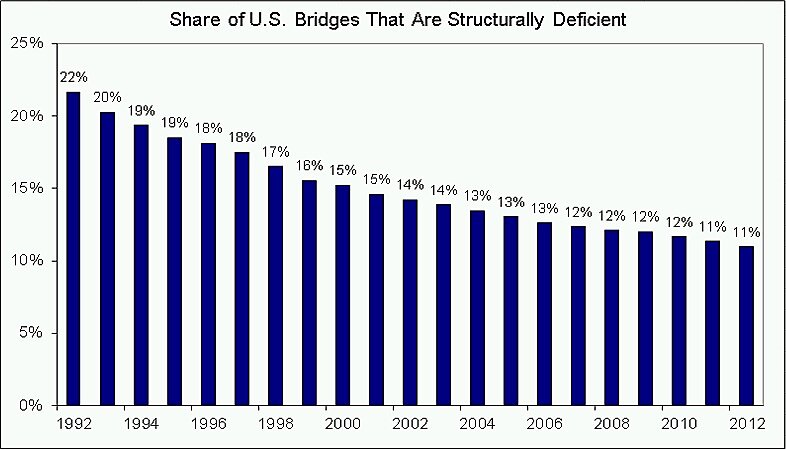 The general thrust of the WSJ story is correct that having an efficient transportation system aids economic growth. But falling down bridges isn’t the central problem, and hiking gas taxes and boosting federal spending isn’t the solution. Instead, we can spur growth and improve the efficiency of America’s infrastructure by moving as much of it as we can to the private sector.