The COVID-19 pandemic has pushed the economy into a deep recession. The crisis will also create lasting economic damage from the jump in debt as a result of higher federal spending and lower federal revenues.

Treasury Secretary Mnuchin said recently that “interest rates are incredibly low, so there’s very little cost of borrowing this money.” That statement is not correct. Mnuchin seems to have forgotten about loan principal. Every dollar borrowed causes damage down the road from the resulting higher taxes extracted from the private sector. Furthermore, interest rates may spike, which will increase federal borrowing costs as accumulated debt is rolled over.

How much debt will the crisis add? Perhaps $6 trillion, based on the rough spending and revenue scenario shown in the chart below.

I started with CBO’s pre‐​crisis baseline projection to 2030 and adjusted annual spending and revenues to reflect the new realities.

Debt will rise further because the recession is reducing federal revenues. During the last recession, revenues fell 18 percent between 2007 and 2009 and took five years to recover to the prior level. For the current scenario, I assumed revenues will fall 18 percent this year due to the recession and then start to recover and regain the CBO baseline level by 2025. Under that scenario, the revenue losses will be $2.2 trillion.

With higher spending and lower revenues, federal borrowing costs will be roughly $1.2 trillion higher over the coming decade.

The chart shows the deficit soaring to $3.9 trillion this year, then narrowing to about $1.5 trillion for a few years before widening again. The gap between the lines on the chart is the new debt added each year. Between 2019 and 2030, the federal government may add $20 trillion in new debt. The future of the U.S. economy is hard to forecast, but we do know that unprecedented mountains of government debt will generate huge risks to the nation.

The previous high federal debt‐​to‐​GDP ratio was 106 percent in 1946. That pile of debt was cut to 56 percent by 1955. Was that fall due to Congress being prudent and running surpluses? Nope. Instead, most of the drop in debt‐​to‐​GDP from 1946 to 1955 was due to substantial inflation that reduced the debt’s real value.

Will the government try to use the same technique to cut its record debt this time? 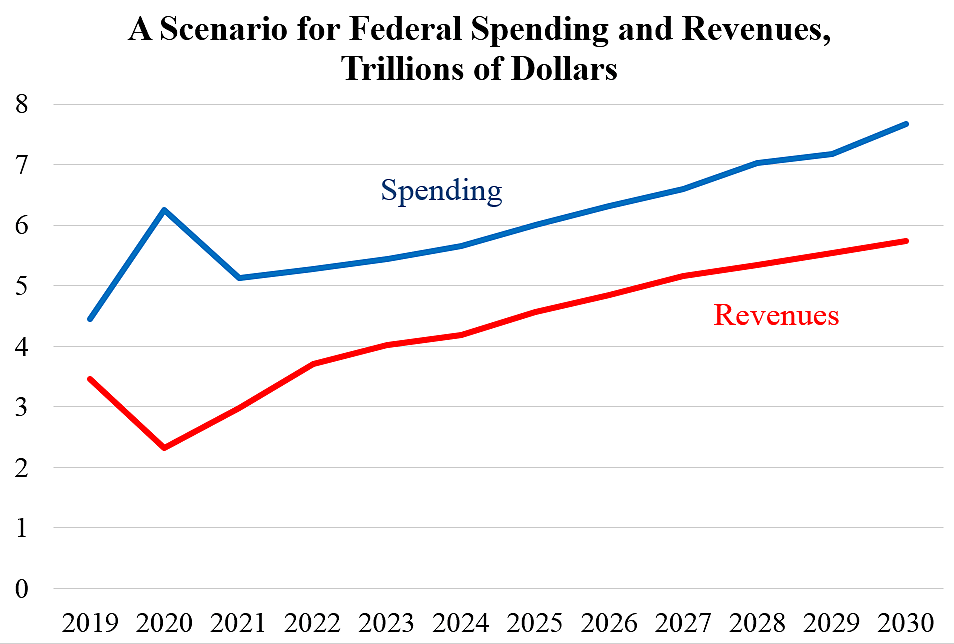 Further background on debt is here.