Customs and Border Protection apprehended 1,148,024 people during Fiscal Year 2019. Border Patrol apprehended 75 percent of them while CBP officers apprehended the remaining quarter. The number of people CBP apprehended was up 68 percent over 2018, but the number of criminals arrested in 2019 was only up about 15 percent over the previous year. As a result, criminal apprehensions in 2019 comprised the smallest share of all apprehensions since 2015, when publicly available data were first published online (Figure 1). We only have data for the first month of the 2020 fiscal year, so those numbers are included even though this post will not draw conclusions about 2020 from a single month of data. 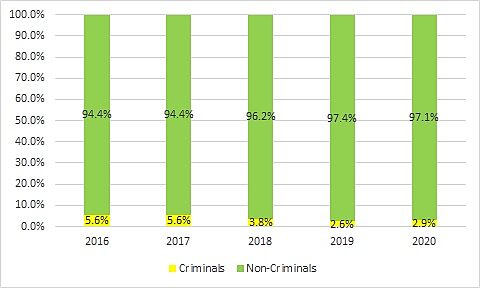 Note: 2020 data is for the first month of that fiscal year.

Perhaps Border Patrol agents apprehended fewer criminals in 2019 because they were diverted to processing asylum claims, leaving fewer agents available to patrol the border which allowed more criminal aliens to evade detection. Thus, the observed falling numbers of criminal aliens apprehended could arise from a lack of detection rather than fewer criminals trying to enter. The number of single adults apprehended in recent years is evidence against that theory. They are the most likely to be criminals. However, the number of single adults apprehended by Border Patrol has risen over the years and the number apprehended by CBP Officers at ports of entry has only dropped slightly. This isn’t a slam dunk response but merely evidence against the theory that Border Patrol is distracted by asylum seekers while criminals are entering undetected.