Secretary Carson’s Department of Housing and Urban Development (HUD) is in the process of revising Affirmatively Furthering Fair Housing (AFFH), an Obama-era regulation. The idea is to reform the regulation to simplify and streamline it, and encourage local beneficiaries to liberalize zoning regulations in order to qualify for funding. Peter Van Doren and I outline one way of doing this in a public comment, here.

However, the idea has been challenged in some places, including this Brookings article from last year. The article suggests that 1) many of the HUD jurisdictions that recieve funding are counties, rather than cities, and counties don’t have control over zoning and 2) the most exclusionary jurisdictions don’t receive much CDBG money, so the reform might have minimal impact.

These arguments warrant a second look. First, it is accurate that HUD awards some CDBG money to counties (and states, too). However, this probably constitutes an advantage, rather than a disadvantage under the reform. Indeed, effectively liberalizing zoning regulations likely benefits from aligning pro-growth city incentives with higher levels of government, including county and state governments.

If county or state funding is contingent on liberalizing zoning, it seems only natural that counties and states would pass those incentives down to municipalities where projects are built. After all, as the Brookings article mentions, “counties and states have considerable discretion over how to divide CBDG funds among smaller communities.” Furthermore, counties have county zoning ordinances they can and should liberalize, and the reform should give them an incentive to do so.

The second criticism of the reform is that the most exclusionary jurisdictions would not be impacted by it. However, this finding hinges on the author’s definition of exclusionary places as those with a low proportion of multifamily housing and high rents. This biases the definition towards expensive suburbs (which, no doubt, can be exclusionary but don't have a monopoly on exclusivity).

Though the paper suggests urban areas like San Francisco, Los Angeles, and San Jose are “less exclusive” relatively, these locales are extremely exclusive compared to the rest of the country. For example, low income workers and minorities have been fleeing San Francisco’s high rents  for years, as I point out here and here. The median rent in the city of San Francisco is $4,324, or 3x as expensive as the national median, while San Jose and Los Angeles median rents aren’t far behind at $3,460 and $2,955.

And although San Francisco, San Jose, and Los Angeles have more multi-family housing than many suburbs, it isn’t obvious how that helps if the multifamily housing they contain isn't affordable. As Kevin Erdmann writes in his new book Shut Out, San Francisco, San Jose, and Los Angeles are “closed access” cities that “have become enclaves of privilege for high earning workers where … service workers who would have followed high earning workers into the cities so that they could also capture some of the gains of new economic growth are locked out of that opportunity for lack of homes.”

Setting these criticisms of the reform aside, are there reasons to think AFFH reform may work? Well, similar to other housing subsidies, CDBG per capita funding is correlated with zoning restrictiveness at the state level. That is certainly counterproductive from a policy standpoint, but it does suggest that the places with the greatest zoning problems would have the greatest incentive to relax their zoning under AFFH reform. 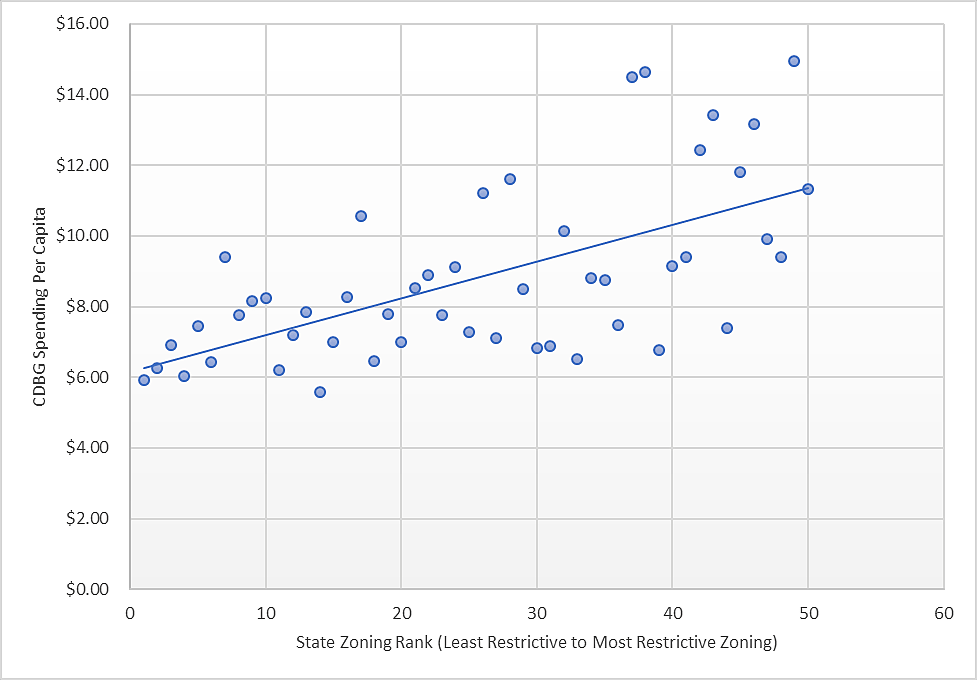 Of course, this doesn't mean that just any reform to AFFH would have its intended effect, and without more information about the particulars it's hard to guess at the outcome. Moreover, states and local municipalities would be smart to tackle zoning themselves, rather than wait for a federal agency to bribe them to. Finally, arguably many of the concerns that apply to AFFH would apply to AFFH reform (namely, it isn't obvious that the Fair Housing Act, which AFFH is based on, supports either version of the regulation).
Still, concerns that AFFH reform wouldn't work because HUD spends CDBG money on counties, or because HUD spends CDBG money on supposedly less-exclusionary locations, seem exaggerated.