The federal government is enormously inefficient. Agencies have little incentive to control costs or improve quality, and Congress does little serious oversight. Indeed, members face incentives to spend lavishly on items such as Pentagon weapon systems because higher costs mean more spending in their districts.


The Pentagon and many other agencies incur large cost overruns on projects. NASA’s projects, for example, often skyrocket in cost and touchdown on completion far behind schedule. NASA originally estimated that assembly of the International Space Station would be complete by 2002 at a cost $17 billion, but assembly was not complete until 2011 at a cost of $74 billion.

The rocket NASA plans to use to get astronauts to the moon by 2024 has for years suffered significant cost overruns and schedule delays. But those problems are even worse than originally thought, according to a federal watchdog report expected to be released Wednesday.


The report, a copy of which was obtained by The Washington Post, said NASA had masked the true price tag of the program by shifting some costs to future missions without accounting for them. It accused the space agency of “a lack of transparency … especially for its human spaceflight program” and said NASA misrepresentations made it hard to determine the true cost of the program.


It said the cost of the rocket, known as the Space Launch System [SLS], had grown by nearly 30 percent or nearly $2 billion and that the first launch of the rocket, initially expected in late 2017, might not happen until June 2021.


Still, NASA has continued to pay tens of millions of dollars in “award fees” to Boeing, the SLS’s primary contractor, for scoring high on performance evaluations.


… But the key to that mission is the SLS, a rocket with a cost that is not fully known since “NASA’s current approach for reporting cost growth misrepresents the cost performance of the program,” according to the GAO.


In its latest report, the GAO said that NASA diverted nearly $800 million of program costs to future missions, which it said “obscures cost growth” for the program. It also noted that NASA cost estimate runs only through the first launch of the rocket, meaning there is a lack of transparency into what the total cost of the program is.


The GAO report also took aim at the program to develop the Orion spacecraft that would fly atop the SLS. The prime contractor for that program is Lockheed Martin, which also has been receiving regular award fees from NASA, despite being over budget.

divAmerica’s moon landing 50 years ago was a brilliant achievement. But taxpayers should not have to foot the bill for another manned lunar visit because robots are more efficient at exploration these days and private enterprise is the future for people in space. 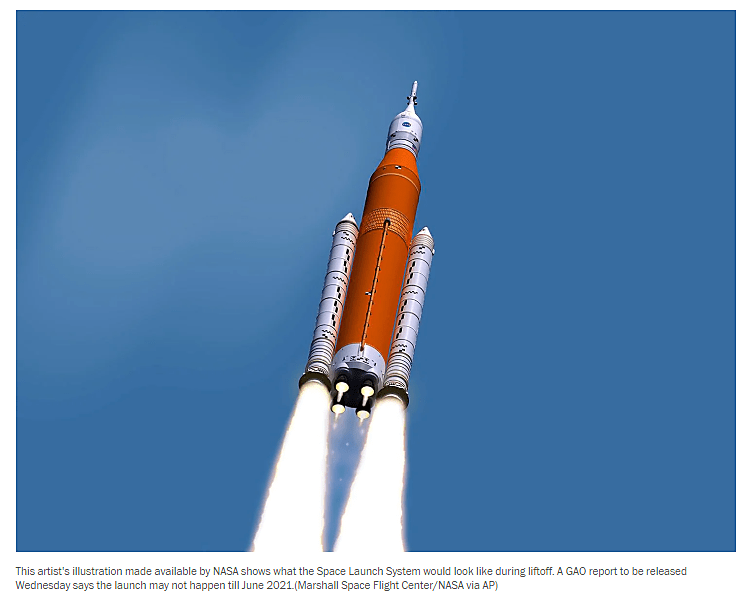