A Wall Street Journal editorial was right to zero in on Elizabeth’s Warren’s “determined refusal to say if her plans would require taxes to increase on the middle class.” In the Democratic presidential debate the other night, the senator repeatedly ducked concerns that the costs of her huge spending plans would land on more than just the wealthy.

They surely would. The larger welfare states of Europe and some other high‐​income economies are not fueled by higher income taxes than ours, but by higher taxes on consumption and worker wages.

There are 36 high‐​income countries in the OECD. Thirty of them have higher overall taxes than we do as a percent of GDP. How do those higher‐​tax countries raise revenues? The chart below shows that they raise about the same amount as us in income taxes, but much more in Social Security (wage) taxes and goods and services (consumption) taxes. Those sorts of taxes hit lower‐ and middle‐​income households hard.

Warren and other Democrats say that they will pay for expanded programs with higher taxes on the rich. But that is unlikely. If their spending plans were enacted, the costs would ultimately be paid by higher taxes on all of us. 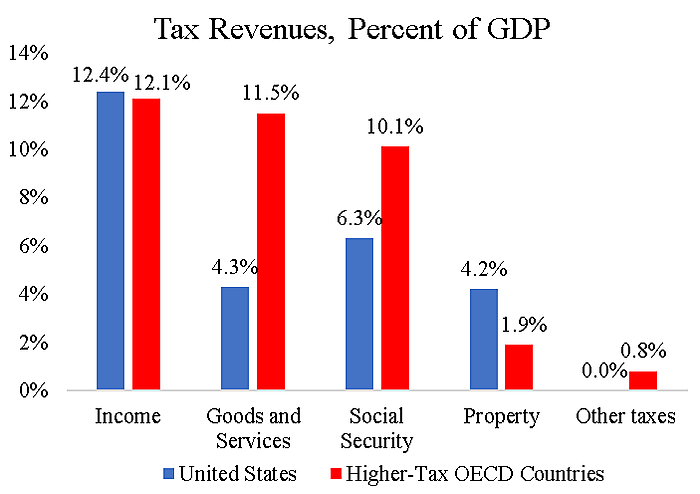 The five OECD countries with lower taxes than the United States are Chile, Ireland, Korea, Mexico, and Turkey. OECD tax data is here. The data includes all levels of government.