A new Government Accountability Office report on the Low Income Housing Tax Credit echoes some of the concerns expressed in this 2017 Cato report. Vanessa Brown Calder and I suggested that the $9 billion program was vulnerable to abuse and that the costs of projects may be inflated.


Under the program, the IRS hands out tax credits to state agencies, which in turn give them to favored developers. We argued that the program had little oversight and that developers and contractors may inflate their claimed costs.


The GAO found that “no federal agency monitors or assesses LIHTC development costs, which are key to evaluating the efficiency and effectiveness of the tax credit program.” At the state and local levels, “few agencies have requirements to help guard against misrepresentation of contractor costs (a known fraud risk).” Because the IRS and many state agencies do not require detailed cost certifications, “the vulnerability of the LIHTC program to this fraud risk is heightened.”


The GAO compared the costs of 1,849 projects in 12 jurisdictions. They found a wide variation, as shown in the chart below.


Whether it is taxes, gasoline, or housing, everything seems to cost much more in California than Texas. The cost of low‐​income housing units are two and half times higher in the Golden State than in the Lone Star State. GAO found that both the hard costs of construction and the soft costs (such as architect fees) were much higher in the former than the latter.


Vanessa and I call for repeal of the LIHTC program.


To tackle housing affordability, she has suggested a deregulatory approach, which was recently embraced by HUD secretary Ben Carson. 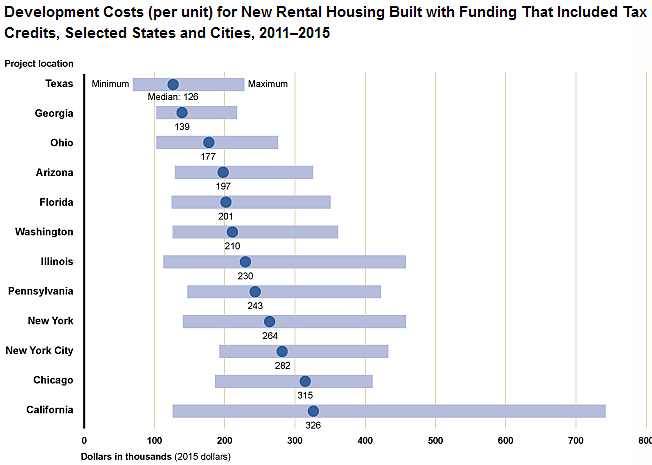