If Republicans succeed in slashing the federal corporate tax rate from 35 percent to 20 percent or less, the tax base will expand as investment increases and tax avoidance falls. There is no need for a legislated expansion in the tax base, as the GOP is proposing with its “border adjustment” scheme. The tax base will broaden automatically over time to offset the government’s revenue loss from the rate cut.


New evidence comes from Britain, which has enacted a series of corporate tax rate cuts. A study by the Centre for Policy Studies includes this chart. It shows the tax rate falling from 35 percent to 20 percent since the late 1980s and corporate tax revenues as a percentage of gross domestic product (GDP) trending upwards. As the rate has fallen, the tax base has grown more than enough to keep money pouring into the Treasury. 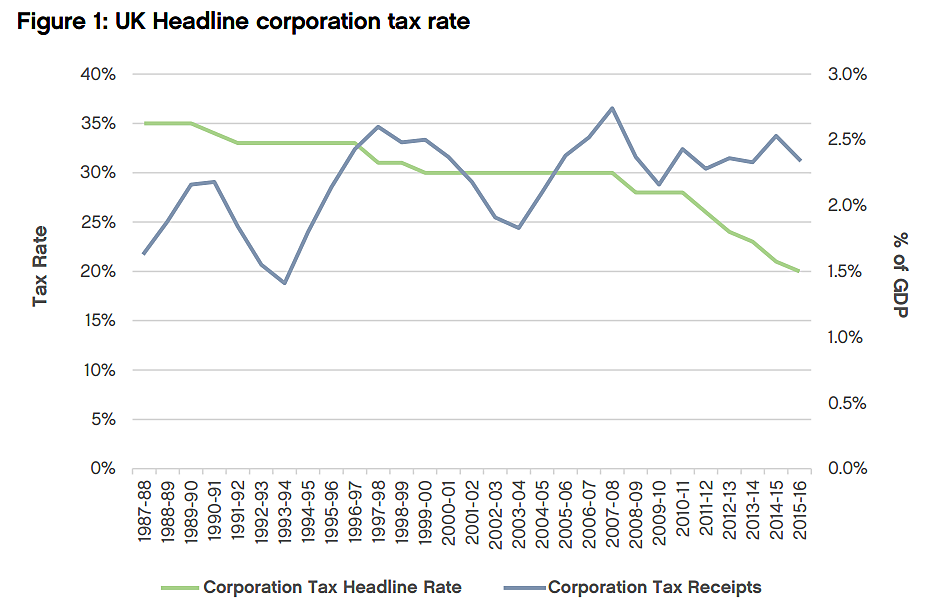 Does legislated base broadening explain the increase in U.K. tax revenues? Not for the most recent round of rate cuts. In 2010-11, the government collected £36.2 billion from a 28 percent corporate tax. The government expected its corporate tax package—including a rate cut to 20 percent—to lose £7.9 billion a year by 2015–16 on a static basis. That large expected loss indicated that the package had little legislated base broadening. Study author Daniel Mahoney sent me a table confirming that the package included only modest base‐​broadening measures that were mainly offset by base‐​narrowing measures.


The government’s dynamic analysis of the corporate tax package projected a revenue loss of about half of the static amount over the long run. But that analysis was apparently too pessimistic: actual revenues in 2015–16 had risen to £43.9 billion. So in five years, the statutory tax rate fell 29 percent (28 percent to 20 percent) but revenues increased 21 percent (£36.2 billion to £43.9 billion). That is dynamic!


Looking at the longer term, the CPS study says, “In 1982–83 when the rate was 52%, corporation tax receipts yielded revenues equivalent to 2% of GDP. Corporation tax now raises over 2.3% of GDP when the headline rate is at just 20%.” The Brits have scheduled a further rate cut to 17 percent.


Canada’s experience also shows that when you slash the corporate tax rate, substantially more profits appear on corporate returns over time. Canada cut its federal corporate tax rate from 28 percent and higher in the 1980s to just 15 percent today, but it collects about the same amount of corporate tax revenues as a share of GDP now as then.


The British and Canadian experiences show that large corporate tax rate cuts lose governments little if any money. There is no need for risky changes to the corporate tax base, as House Republicans are proposing with border adjustments. That approach would disrupt the economy and invite retaliation from our trading partners for no economic gain.


The CPS study suggests that British industry has responded strongly to tax rate cuts, with rising investment and higher wages for workers. That’s what we want here. So Republicans should put aside their complex base‐​broadening plan, and just slash the corporate tax rate to the British‐​Canadian range of 15 to 20 percent.


The CPS study is here.