Canada’s federal government introduced a budget yesterday that includes new estimates of corporate tax revenues. I’ve discussed how Canada has cut its statutory corporate tax rate to a fraction of the U.S. rate, yet Canada raises more revenue. The new budget shows that the Canadian federal 15 percent tax raised 1.9 percent of GDP in revenue in 2012, while the U.S. federal tax at 35 percent raised just 1.6 percent, per CBO.


U.S. revenues are below normal levels right now, so let’s look further out at the steady‐​state projections for the two countries. Canada’s budget projection to 2018 shows that corporate tax revenues under the 15 percent rate are expected to stabilize at 1.9 percent of GDP. U.S. projections by the CBO show that corporate tax revenues will rise to 2.6 percent and then fall back to 2.0 percent in the longer‐​term. So the Canadian corporate tax will raise 95 percent as much as the U.S. tax even though the Canadian rate is just 43 percent of the American rate. The upshot is that worries about proposed U.S. corporate tax cuts reducing revenues are misplaced. If the U.S. federal government chopped its 35 percent rate, the tax base would expand automatically over time and the government would probably lose little if any revenue.


The following charts compare U.S. and Canadian rates and revenues: 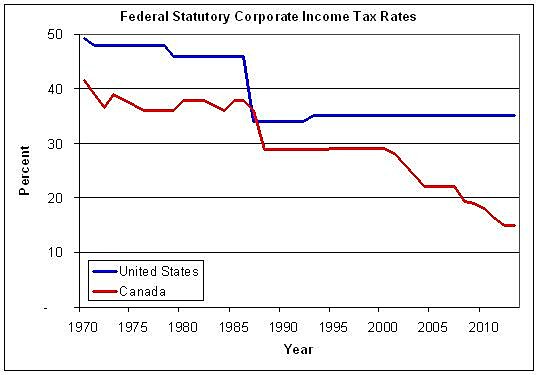 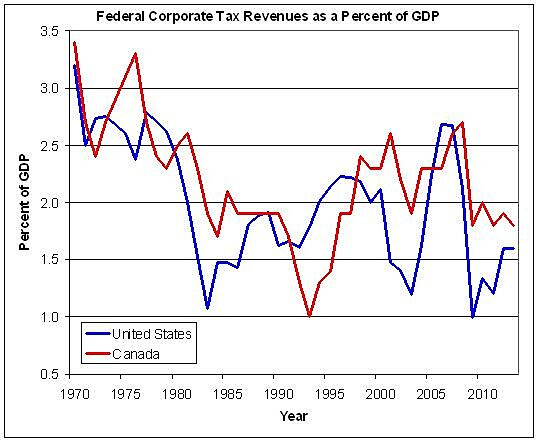