Politicians are having fun slapping around big corporations for supposedly not paying enough taxes. In this country, Apple is the current target, while in Europe it’s Google, Amazon, and Starbucks, according to the Washington Post today.


But there is an elephant in the room that the many reporters and politicians blustering over the issue have been too ideologically blind to see: There is no obvious harm being done by today’s corporate tax avoidance.


The first thing to note is that when investment flows through tax havens, it’s not clear that it causes any economic distortions. The Washington Post story makes a big thing out of foreign direct investment (FDI) flowing through low‐​tax Bermuda and the Netherlands, but then ending up funding actual factories built elsewhere. Economists worry when taxes distort real investment flows, but that does not seem to be happening here. Indeed, FDI is likely being allocated efficiently across final destination countries in these situations, and the interim trip through low‐​tax jurisdictions simply shaves off an extra layer of unproductive and distortionary taxes.


An even more obvious reason to question whether corporate tax avoidance is causing any harm–even from a pro‐​government perspective–is that corporate tax revenues have been trending upwards across the developed world. The chart below shows that corporate tax revenues as a share of GDP have been rising over the decades, despite the dramatic reductions in statutory tax rates in most countries. Revenues dipped in recent years because of the recession, but they are now trending upwards again even though growth is still very sluggish. (OECD data here).


So even if one believes the liberal view that higher government revenues are a good thing, there is no evident harm being done to government budgets from today’s supposed rampant tax avoidance. For more, see Dan Mitchell’s piece here, and Global Tax Revolution here. 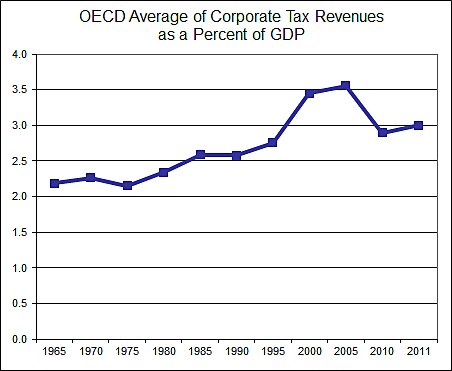