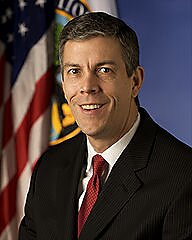 There’s been much ink spilled the past few days over U.S. Secretary of Education Arne Duncan’s defense of the Common Core, delivered as an obnoxious attack on white, suburban women. Proclaimed Duncan to a meeting of the Council of Chief State School Officers (one of the Core’s progenitors):

Much of the uproar over Duncan’s attack has been over his injecting race and sex into the Common Core debate, and that certainly was unnecessary. But much more concerning to me – and indicative of the fundamental problem with federally driven national standardization – is the clear message sent by Duncan’s denunciation of Jane Suburbia: average Americans are either too dull or too blinkered to do what’s best for their kids. The masses need their betters in government – politicians, bureaucrats – to control their lives.


Alas, this has been a subtext of almost the entire defense of the Core. Every time supporters decide to smear opponents primarily as “misinformed” or “conspiracy theorists,” they imply that people who are fighting for control of what their children will learn are either too ignorant, or too goofy, to matter.


Of course, there are some opponents who don’t get all the facts right about the Common Core, but supporters ignore that many of these people are just finding out about the Core. Unlike major Core supporters, many opponents – often parents and plain ol’ concerned citizens – haven’t been working on the Core for years. And even when opponents use such regretably over‐​the‐​top rhetoric as calling the Common Core “Commie Core,” they are ultimately making a legitimate point: the federally driven Core is intended to make the learning outcomes of all public schools the same – “common” is in the name, for crying out loud! – and in so doing, nationalize learning. At the very least, that’s not a move in the libertarian direction.

Every once in a while, Core supporters will openly air their basic distrust of average Americans. If you go to the 53:10 mark of our Common Core “Great Debate,” you’ll catch just such an admission by Chester Finn, president of the Core‐​championing Thomas B. Fordham Institute. In response to an explanation of how free markets enable average people to smartly consume things about which they are not experts, Finn declares that most parents won’t do even easy work to make informed choices. Then he asks, “is that a way to run a society?”


And there it is: In the end, Common Core, and all the government power behind it, is ultimately about experts running society rather than letting free people govern themselves. Why? Because parents – “the people” – are either thought incapable, or unwilling, of caring for their children themselves.


This attitude if fundamentally at odds with maintaining a free society. It declares that government must control what children learn, and in so doing gives government – not free people – the power over what the next generation of Americans will think. This is not to say that the Common Core is intended to inculcate values and attitudes – most supporters probably just want to better furnish skills – but it will nevertheless couple power over what the schools teach with an attitude that is fundamentally corrupting: I know what is best, and must make you do it. And if your betters think you can’t be trusted to teach your child about something as unthreatening as the ABCs, imagine what they may eventually require – or forbid – in teaching about religion, or guns, or climate change?


As has been the case in the past, Secretary Duncan has actually done Common Core opponents a huge favor in an effort to take them down. But this may be his most important contribution yet, revealing the supremely threatening contempt in which he seems to hold the average parent, and which drives the Common Core.