Today we published a short study showing how Spain’s new conservative government has decided to deal with its deficit of more than 8 percent by cutting some spending and raising income and other taxes significantly, making Spain among the most highly taxed countries in Europe. The Spanish authors of the study point out that the measure will have pernicious effects on the economy and slow private sector recovery. As the graph below shows, the problem has been too much spending. 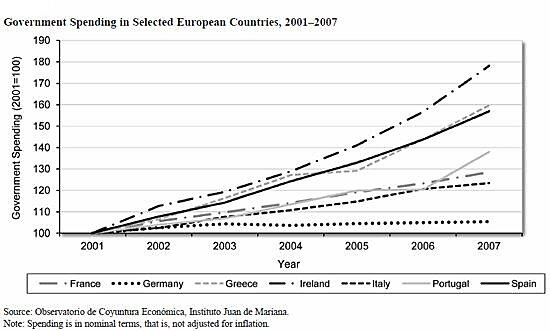 Spanish recovery requires significant reforms in the labor market, financial sector, business regulation and the welfare state. Some progress is being made in the first two areas, but the government still has room to do much more in all of the above. For those reforms to have greater chances of success, a better approach to fiscal policy is needed. Luis de Guindos, now Spain’s minister of the economy, provided a reminder of good policy at a 2003 Cato conference when he explained how Spain since the 1990s had eliminated its large deficit by cutting spending and taxes. That advice is as good now as ever.