The Consequences of Our War on Low‐​Skilled Immigrant Labor 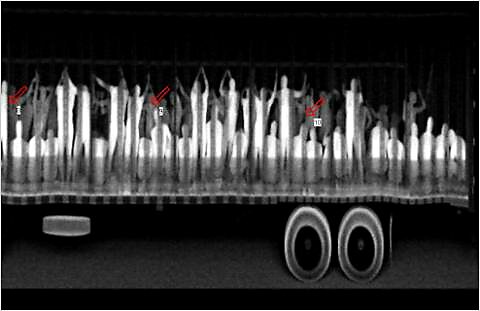 Authorities in Mexico intercepted two semi-trucks on Tuesday containing more than 500 migrants being smuggled across the border from Guatemala and presumably headed for the United States. An x-ray of one of the trucks that revealed the migrants struck me for its resemblance to those 18th century woodcarvings of slave ships crossing the Atlantic.

That analogy shouldn’t be taken too far, of course. According to the news reports, the migrants voluntarily paid $7,000 each for the chance to be smuggled into the United States. But like the slave ships, the conditions in the trucks were horrific, putting the lives of the men, women and some children in real danger.

People across the spectrum will try to make hay from this, but to me it argues that the status quo is unacceptable. No respectable party is in favor of illegal immigration. The real debate is over how to reduce it and all the underground pathologies that accompany it.

We can continue to ramp up border and interior enforcement, as we have relentlessly for more than a decade, driving low-skilled migrants further underground while driving smuggling fees higher and higher. Or we can expand opportunities for legal entry into the United States, and by doing so shrink the underground network of smuggling and document fraud.

Like the repeal of Prohibition in 1933, real immigration reform would go a long way to eliminating the human bootlegging that was exposed in Mexico this week. A robust temporary worker program would allow foreign-born workers to enter the country in a safe, orderly, and legal way through established ports of entry. It would allow resources now going to smugglers to be collected as fees by our government and otherwise put to work in our economy. It would save the lives of hundreds of people who needlessly die each year trying to re-locate for a better job.

If Congress enacted the kind of immigration reform we have long advocated in my department at Cato, our economy would be stronger and the human smuggling networks a lot less busy.