New data on Roman Catholic school enrollment is out, and it confirms what Cato CEF survey and closure tracker data have suggested since the start of COVID-19 lockdowns: private schools, especially Catholic, are hurting.

The National Catholic Educational Association just announced a 6.4 percent enrollment drop in Catholic schools between the 2019–20 and 2020–21 school years. That is basically what we found in our survey of private schools generally: the average school reported roughly a 6 percent enrollment loss, though notably Catholic schools were only 20 percent of our respondents. And the survey sample was itself quite small.

Our COVID‐​connected permanent closure tracker – the latest summary is below – is dominated by Catholic schools, accounting for 105 of the 126 announced closures since March. The NCEA reports that more than 200 Catholic schools closed or consolidated since the 2019–20 school year. Many of those were closed in part due to COVID’s economic impact, but many preceded COVID or would have occurred regardless. 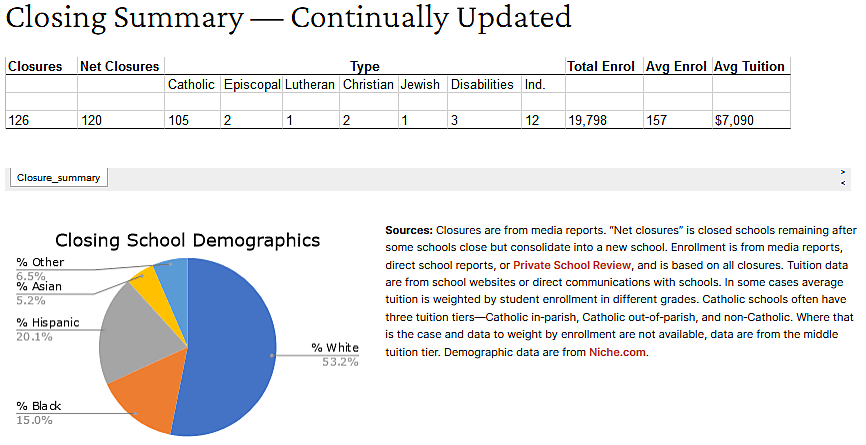 Catholic schools have been losing enrollment for decades for numerous reasons, including declining numbers of low‐​cost clergy, Catholics becoming “mainstream” and feeling more comfortable in public schools, priest scandals, and more. They also tend to be the lowest cost private schools and to serve more low‐​income communities, sometimes without a whole lot of Catholics in them, putting them in especially precarious financial positions. Thin margins are always a problem, but they likely rendered Catholic schools especially susceptible to COVID economic hits. That COVID had its own effect is corroborated by the NCEA reporting that this was a record loss year in over five decades of tracking.

This is in part a Catholic school problem, but exacerbated by COVID.

It is also a broader private school problem. We likely hear more about Catholic school struggles because the schools are typically parts of much bigger organizations – dioceses. Dioceses are likely to produce public reports of closures and enrollment trends that get picked up by media, while other private schools, which more often function independently, may have lower profiles. We know from surveys, though, that at least some other private schools have experienced appreciable enrollment losses under COVID. This is not just a Catholic school problem.

A major underlying problem, of course, is limited school choice. While the latest EdChoice data show about 610,000 students enrolled in private schools via choice programs – a record – it is as nothing compared to the approximately 54 million school‐​aged Americans. So all but a sliver of Americans have to pay twice if they want private schooling – once in taxes for public schools, a second time for private.

As far as COVID relief has gone, I am working on an estimate of how much public and private schools have received in federal relief to determine if private schools have been treated equitably, and how they might fare under the developing Biden proposal. So far it appears that the Paycheck Protection Program, which private schools could access but public could not, has greatly assisted private schools, perhaps outpacing public school relief, but I have more number crunching to do. And nothing in the PPP could compensate for private schools being at a huge funding – and hence competitive – disadvantage to public schools for basically the entire existence of public schooling.

The news for private schools under COVID is turning out to not be so good. If we want to maintain a healthy, diverse education system, there is only one vaccine: a lot more school choice. And we may need it very soon.