Cato senior fellow Steve Hanke and co‐​author Nicholas Krus have carefully documented all 56 episodes of hyperinflation in world history in a new Cato working paper. Until now, a complete list of hyperinflationary experiences has not been available in the scholarly literature for reasons the authors explain, including poorly defined terminology and a lack of a consistent methodology.


Below, I reproduce some data on the top 10 hyperinflationary episodes in history (taken from the table on page 12). All of the hyperinflations in the comprehensive table occurred in the twentieth century with the exception of France’s in 1795 and Zimbabwe’s, which began in 2007 and became the second highest in history. Some might be surprised not to see a Latin American country in the top 10. The region came close; there are six Latin American countries on the overall list, with Peru ranking highest in twelfth place. The country had a monthly hyperinflation of 397% in August 1990, a rate at which prices doubled every 13 days. North America and the Middle East are the only regions that do not make the list, while only three countries in East Asia appear and their inflationary episodes occurred in the 1940s. (They are China, Taiwan and the Philippines, which really is more like a Latin American country in major respects.) 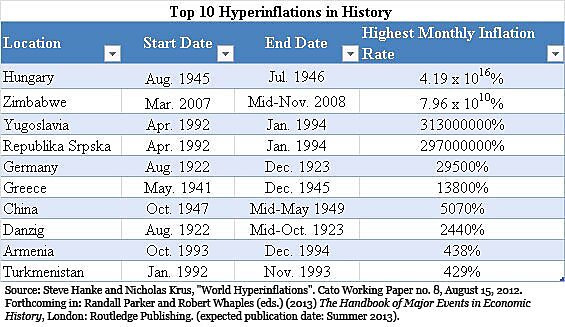