Climate Impact of the Keystone XL Pipeline: Some Further Thoughts

On Tuesday, I posted an analysis of the climate impacts from the burning the oil that would be transported through the Keystone XL pipeline (if the pipeline were to be approved).


I concluded that on an annual basis, the burning of the ~800,000 barrels of oil that would flow through the pipeline each day would produce about 0.0001°C of global warming per year (one ten‐​thousandths of a degree Celsius)—a value of little climatological significance.


But on further reflection, I think this number is too high.


Data on U.S. oil consumption from the Energy Information Administration (EIA) shows that our consumption peaked in 2005 at a rate of nearly 21 million barrels per day (bpd) and has declined since. In 2011 (the last year of available data) the value was just under 19 million bpd. The EIA projects a continued slight decline of U.S. petroleum consumption for decades into the future. 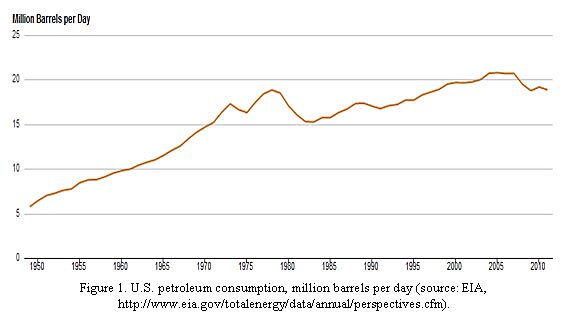 This means that oil flowing through the Keystone XL pipeline will not amount to additional oil use, but rather will displace more expensive (economically and/​or socially) foreign oil imports. Thus, all else being equal, the Keystone XL pipeline would lead to no additional global warming beyond that which would have taken place anyway from our domestic oil consumption.


But all else is not quite equal because the extraction and refining process of the Alberta tar sands oil (that the Keystone XL pipeline will deliver) is more energy intensive than oil from the Middle East, or Mexico, or Venezuela. By most accounts, this extra effort increases the lifecycle (well‐​to‐​wheel) CO2 emissions of Alberta tar sands oil by about 15 to 20 percent.


What this means is that instead of assuming CO2 emissions from an additional 800,000 new barrels of oil each day, I really should consider only the extra 15–20% of emissions that the 800,000 bpd of tar sands oil produces over the oil that we currently import. When I do this, instead of 0.0001°C of added warming each year, I get that the Keystone XL oil will produce only about 0.00001°C of warming each year (give or take a couple hundred thousandths of a °C).


I think we can all agree that 0.00001°C of warming is effectively the same as zero warming.


No matter how you look at it, there is no climate impact of the Keystone XL pipeline.


Whether or not other transportation routes out of the Alberta tar sands open in the future to meet the growing global (outside of the U.S.) demand for oil should not be a matter of consideration when assessing the climate impact of the Keystone XL pipeline.