People react to public policies by changing their behavior.  Foreigners committed to immigrating to the United States are confronted with two options – they can come legally or they can come illegally.  When visas are legally available, cheap, and plentiful they choose to come legally.  When visas are difficult to get, expensive, and few in number then many immigrants decide to come illegally.*  Employers face a similar dilemma when choosing to hire workers.

The inflow of illegal immigrants has slowed dramatically in recent years.  The poor American economy, economic growth south of the border, Mexican demographics, and heightened border security all partially explain that decline.  Another explanation is that the number of guest worker visa has increased, convincing some would-be illegal immigrants to instead enter and work legally.

The annual number of guest worker visas issued on the E, H, L, O, P, and TN visas increased by 157 percent from 1997 to 2015.  The annual number of green cards for new arrivals also increased by 25 percent during the same time period and, although the majority are for lower-skilled family members, they also work in many of the occupations that would otherwise be filled by illegal immigrants.  The gross number of illegal immigrants making it into the United States each year also shrank during that time.

The number of guest workers, gross illegal immigrant entries, and green cards issued to new arrivals is surprisingly flat from 1997 to 2015, ranging from a high of 1.66 million in 1999 to a low of 1.17 million in 2009 (Figure 1).  The average during the entire period is 1.41 million entries a year.  The number of entries is remarkably constant even when considering the Great Recession and slow recovery, indicating that the number of entries doesn't change nearly as much as the method of entry.  New green cards and guest worker visas are being used by many immigrants who would otherwise have entered illegally. 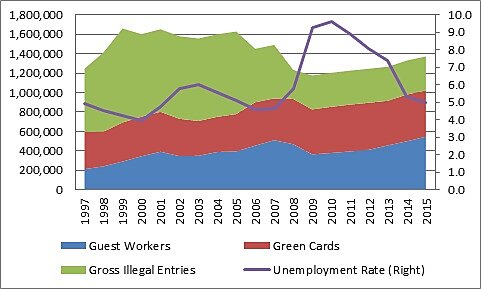 Mexicans are less likely to illegally immigrate than in previous years.  In 1997, Mexicans accounted for 97 percent of all border patrol apprehensions.  According to Customs and Border Protection (CBP), Mexicans accounted for little more than half of all apprehensions in 2015 and were less than half for the first time in 2014.  The number of guest worker visas issued to Mexicans increased 5.4 fold from 1997 to 2015 – from a mere 33,759 to 182,698 (Figure 2).  By contrast, the total number of guest worker visas issued to those of every nationally annually doubled over that time.  In 1997, Mexicans were issued 15.7 percent of all the guest worker visas.  In 2015, they were issued 33.4 percent.  The guest worker programs expanded and Mexicanized, funneling would-be illegal immigrants into the legal market – helping to explain the particularly sharp drop in Mexican illegal immigration. 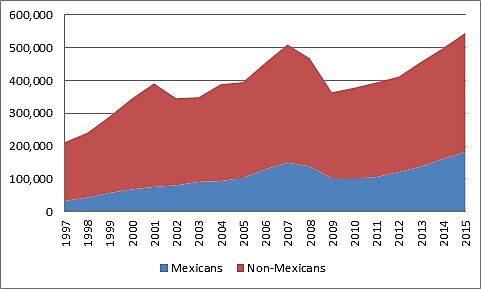 Guest Worker Visas Issued to Salvadorans, Guatemalans, and Hondurans Compared to Other Than Mexican Apprehensions 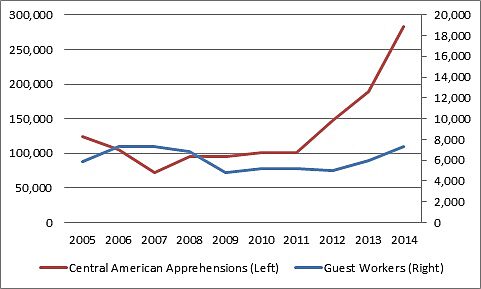 Central Americans also have new reasons to flee such as violence and the second stage of immigration – children and other family members reuniting with their parents who emigrated first.  The lack of guest worker visa programs for Central Americans means that they will continue to come illegally.  Policy makers could instead increase the legal options for Central Americans to legally migrate to the United States for work and thus eradicate the incentive to come illegally.  Such a policy contributed to the decline of Mexican illegal immigration and could accomplish the same goal a lot more cheaply, humanely, and safely than building a wall.

*Of course, the cost of circumventing border security can absorb much or the entirety of the benefits.  Acquiring a tourist visa with the intent of overstaying requires fooling a Foreign Service Officer.  Traveling to Mexico and then crossing the border illegally isn’t a picnic either.  Human smugglers charge high prices and there’s no guarantee that they’ll succeed.  The number of foreigners who would come here illegally in the absence of border security is vastly greater than those who try today, which means border security is more effective than most people realize.