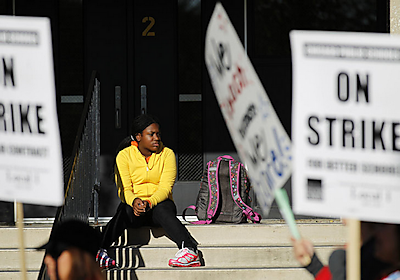 Chicago's teachers have just walked off the job, and most of the media coverage is quick to point out that this is the city's first strike in a generation. But is anyone really that surprised by a public school union striking just as kids are supposed to be heading back to class in September? Wouldn't you be a lot more shocked if you logged on to Amazon.com and were greeted by the message that its site was down due to an employee walkout? Or if you took the kids to the movies to see the latest cartoon extravaganza and found picketing ticket-takers? What is it about public schools---and other government enterprises, for that matter—that have made their unions so much more dominant than those in the private sector? [Two thirds of the public school workforce is unionized compared to about 7 percent in the private sector].

Competitors. Or, rather, the lack of them. Private sector workers can only demand so much from their companies before the demands become self-defeating. Get a pension package that's too cushy, a salary that's too far above the market rate, and the employer will have to pass those costs on to customers. And if those higher prices aren't accompanied by correspondingly better quality, customers will simply go elsewhere---hurting the employees who asked for more than the market would bear.

And there's the problem with public schooling: there's no "elsewhere." If you don't like the way your local school district is run, there isn't a competing school district vying to provide your kids with a better education at a lower cost. You've got no place else to go, and unions know this. So they can ask for more employees to be hired, better pensions or health benefits, and they can demand that their compensation not depend on their performance. And there's very little that parents and taxpayers can do about it.

That's what's happened in Chicago, where the average teacher's salary is about $75,000 (almost 50% above the citywide private sector average), public sector retirement benefits are so generous that Illinois owes $203 billion for this purpose that it simply doesn't have, and the teachers' union has decided that it will not go along with the district's plan to make salaries depend partly on classroom performance.

In the absence of real private sector competition and parental choice, public school unions have been able to drive up the system's costs without needing to show improvement in performance. Sooner or later, Illinois will adopt a system, like education tax credits, that provides real choice and competition, because the current system will ultimately bankrupt the state.