The Cato Institute media department sent this press release to media outlets in Latin America, after the Venezuelan government tried to shut down a Cato‐​sponsored conference this week:

CAUCAGUA, VENEZUELA—A Cato Institute educational seminar fell victim to an attempt by the Venezuelan government to shut it down for expressing ideas critical of the Chavez regime.


During the course of the event on Monday, the National Guard, state television and a state representative from a ministry of higher education interrupted the seminar, demanding that the seminar be shut down on the grounds that the event organizers did not have permission to establish a university in Venezuela. When the authorities were told that neither Cato nor CEDICE was establishing a university and that the Cato Institute has long sponsored student seminars called Cato Universities, the authorities then insisted that the seminar was in violation of Venezuelan law for false advertising.


After two hours of groundless accusations, the Chavez representatives left but their harassment has continued. One of the speakers at the seminar, Peruvian intellectual Alvaro Vargas Llosa, was detained by airport authorities Monday afternoon for three hours for no apparent reason. He was released and told that he could stay in the country as long as he did not express political opinions in Venezuela.


“The government’s attacks on freedom of speech are part of a worrying pattern of abuse of power in Hugo Chavez’s Venezuela,” said Ian Vasquez, director of Cato’s Center for Global Liberty and Prosperity, from Caucagua. “But they have so far not managed to alter the plans of the Cato Institute here, and will hopefully not do so, as we continue to participate in further meetings the rest of this week.”


UPDATE (5/27, 2:30 PM EST) : Cato just received word from scholar Ian Vásquez that “Chavistas are gathering in front of the conference hotel now…Cato is all over state TV.”


Vásquez snapped this photo of people carrying anti‐​Cato signs and protesting the conference. 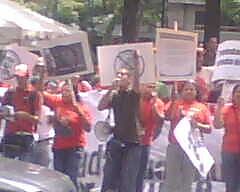