New projections from the Congressional Budget Office show that without reforms rising federal spending will fundamental reshape America’s economy, and not in a good way. Under the CBO’s “alternative fiscal scenario,” the federal government will consume an 86 percent greater share of the economy in 2035 than it did a decade ago (33.9 percent of GDP compared to 18.2 percent).


The CBO report and many centrist budget wonks focus more on the problem of rising federal debt than on rising spending. As a result, many wonks clamor for a “balanced” package of spending cuts and tax increases to solve our fiscal problems. But CBO projections show that the long‐​term debt problem is not a balanced one—it is caused by historic increases in spending, not shortages of revenues.


This chart shows CBO’s alternative scenario projections, which assume no major fiscal policy changes. All recent tax cuts are extended and entitlement programs are not reformed. 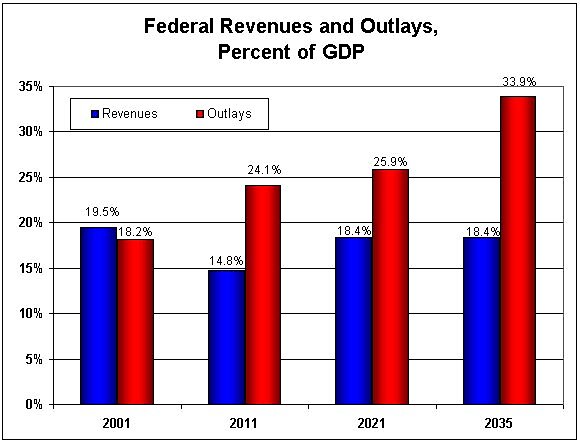 
In 2011, revenues are way down because of the poor economy. Some people complain that the Bush tax cuts drained the Treasury, but note that revenues were 18.2 percent of GDP in 2006 and 18.5 percent in 2007, when the economy was growing and the Bush cuts were in place.


Looking ahead, the CBO projects that with all current tax cuts in place and AMT relief extended, revenues will rise to 18.4 percent of GDP by 2021, or a bit above the normal levels of recent decades. For 2035, the CBO assumes that revenues would be fixed at the same 18.4 percent, but their discussion reveals that “real bracket creep” would actually keep pushing up revenues as a share of the economy beyond 2021.


In sum, CBO projections reveal no shortage of revenues. The problem is on the spending side, as the red bars in the chart illustrate. As a result of the Bush/​Obama spending boom, federal outlays soared from 18.2 under President Clinton to 24.1 percent this year. With no reforms to entitlement programs, outlays will be 33.9 percent of GDP by 2035, which is 86 percent higher than the Clinton level.


By the way, the CBO nets Medicare premiums out of outlays, which makes spending look a little smaller than it really is. Using gross Medicare spending, total federal outlays will be 35 percent of GDP by 2035.


If the federal government grows by 10 percentage points of GDP by 2035 per CBO, American governments will be consuming more than half of everything produced in the nation.


To fix the problem, see here.