The Congressional Budget Office has released new long‐​term projections of federal spending and debt. Without reforms, spending is expected to rise steadily and dangerously as a share of the economy in coming decades. The chart below shows spending under CBO’s “extended alternative” scenario, which assumes that politicians keep current policies in place. Spending would rise from 17.6 percent of GDP in 2000, to 20.4 percent this year, to 31.8 percent by 2040.


Under that scenario, federal debt held by the public would rise from 74 percent of GDP this year to a giant 170 percent by 2040. But if spending and debt were to rise along that trajectory, we would surely have a major financial and economic meltdown long before we got to 2040.


Our fiscal outlook is actually much worse than reflected in this scenario. That’s because under the basic extended alternative, CBO does not take into account the negative effects of rising spending and debt on GDP over the long term. CBO does have a special chapter in their report looking at some of these negative effects—but only some of them. In this testimony, I mention reasons why the outlook is worse than under the CBO baseline. 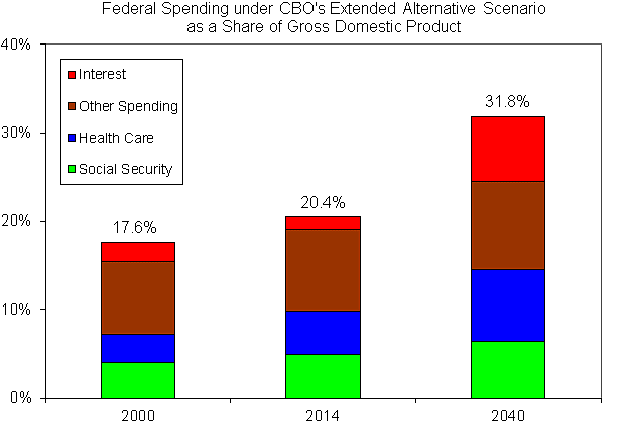