Economic variables are key drivers of the numbers in CBO’s budget projections. I noted last week that CBO’s new outlook assumes substantially lower interest rates, which appears to produce more than a trillion dollars of savings over the next decade.


Policymakers should be aware, however, that macroeconomic forecasts are not very accurate, despite the sophisticated models available today. Consider how CBO completely missed the recent recession until after it had already started (in December 2007).


Figure 1 shows CBO’s January 2008 projection of real GDP growth (blue bars). The recession had already started, yet CBO projected that U.S. growth would strengthen substantially in subsequent years. Their forecast for just one year ahead (2009) ended up being a giant 5.2 percentage points off. (These are fiscal years). 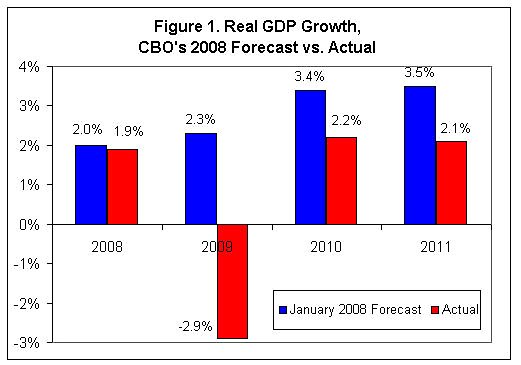 The recession caught most economists by surprise, of course. We know now that the deflating housing sector was a key cause of the recession, but it is interesting that CBO missed the seriousness of that factor, even though they have huge models hundreds of equations in length. Housing prices had peaked in 2005–2006, and had already been falling rapidly for two years when CBO made its faulty January 2008 forecast.


The point here is not to pick on CBO, but to raise skepticism about macro forecasts and the policy prescriptions that stem from macro model simulations. Ezra Klein, for example, is convinced that reducing the deficit at this time would be bad for growth because that’s what (Keynesian) macro models predict. But where’s the real‐​world evidence that cutting deficits is bad for growth? I’ve noted that Canada cut spending and deficits sharply in the 1990s and its economy boomed—the opposite of what Keynesian models would have predicted.


Klein warns America not to follow Britain’s “austerity” policies: “Note the struggles of Britain, which has embraced austerity more fully than perhaps any other major economy, only to see its growth falter and its total debts rise.”


Apparently, Klein hasn’t looked at the actual British data. OECD data (Table 25) show that U.K. government spending soared from 37 percent of GDP in 2000 to 51 percent of GDP in 2010. Spending in 2011 and expected spending for 2012 is cut to about 49 percent of GDP. That’s the brutal “austerity” policy that is undermining British growth?


Here’s one more angle on CBO’s forecast accuracy. Figure 2 shows CBO’s January projections from recent years for fiscal 2011 growth. In the first few years shown, CBO was actually strengthening its view of 2011 growth. It wasn’t until 2010 that CBO’s models finally caught up with the reality of the recession, and the forecast for 2011 was sharply downgraded. In January 2012, CBO reported that actual 2011 growth was 2.1 percent. 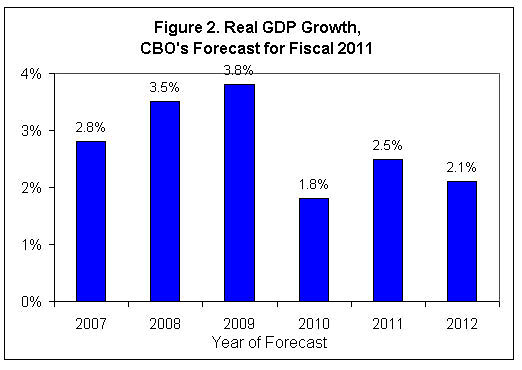 Upshot: With respect to budget policies, policymakers should forget what the macro models are saying. What we know for sure is that the government is spending $1 trillion a year more than it takes in. That’s just crazy. We need to cut spending, and we need to start now.