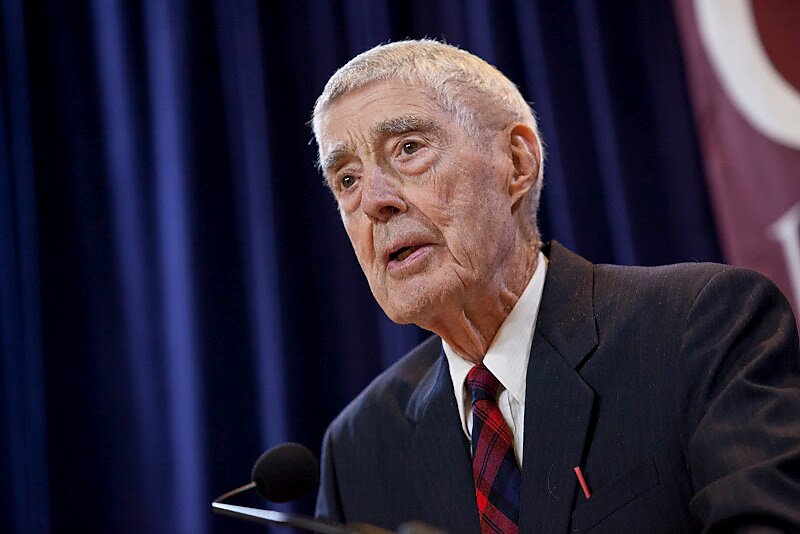 There are not many scholars who at age 90 produce important books. But that is exactly what long‐​time Cato adjunct scholar Dick Timberlake has done with the forthcoming publication of his opus Constitutional Money, which examines Supreme Court monetary decisions and argues that the monetary clauses of the Constitution should be restored by ending fiat money and returning to convertibility. However, if practical politics prevents returning to a full‐​fledged commodity standard, Congress should at least end the Federal Reserve’s discretion and impose a monetary rule designed to produce long‐​run price stability—and stop pretending that the central bank can fine‐​tune the economy to bring about full employment (see Timberlake’s recent article in the Cato Journal).


Timberlake’s many contributions to monetary economics are outlined in the essay below by Kurt Schuler. Kurt notes that not only is Timberlake an accomplished scholar, he is a mentor to younger scholars and a person who practices what he preaches: hard work and honesty. Happy birthday Dick! May you have many more years to enjoy your productive work—keep flying high!

Cato Adjunct Scholar Richard H. Timberlake, Jr. turns 90 years old on June 24. His long and fruitful career as a scholar of money and banking began in 1957, when he published an article in the Review of Economics and Statistics. In 1959 he completed his Ph.D. dissertation at the University of Chicago under the guidance of Milton Friedman. His latest publication is in the current issue of the Cato Journal, and his book Constitutional Money: A Review of the U.S. Supreme Court’s Monetary Decisions is forthcoming from Cambridge University Press.


Dick’s best‐​known work is Monetary Policy in the United States: An Intellectual and Institutional History, published in 1993. It is a much expanded version of his 1978 book The Origins of Central Banking in the United States. Because others, notably Milton Friedman and Anna Schwartz, had focused on gathering and analyzing U.S. monetary statistics, Monetary Policy in the United States focuses on the question “What were policy‐​makers thinking?” It explains the ideas and experiences that influenced the choices that shaped U.S. monetary policy. It is especially useful for its emphasis on the thinking of members of Congress as they created the laws that underlie monetary policy.


Among scholars, Dick’s other most often cited work is “The Central Banking Role of Clearinghouse Associations,” a 1984 article in the Journal of Money, Credit, and Banking. It explains how in the era before the Federal Reserve System, banks across the United States banded together to provide certain services for their members and to act jointly in the face of common dangers during financial panics. In particular, during some panics, clearinghouse associations issued temporary currency that was widely accepted and acknowledged as beneficial despite being forbidden under the perverse restrictions imposed by the laws of the time. Dick incorporated the article as a chapter in Monetary Policy in the United States.


Since this is a brief appreciation of a still‐​active scholar rather than a full career retrospective, it suffices simply to mention a few other of Dick’s writings: Gold, Greenbacks and the Constitution, a 1991 monograph; “Gold Standards and the Real Bills Doctrine in U.S. Monetary Policy,” a 2007 article that supplies an important piece of the puzzle about the Federal Reserve’s monetary policy during the Great Depression; and They Never Saw Me Then, a 2001 book recounting his experience as a bomber co‐​pilot during World War II. Dick received three Purple Hearts for his wartime service.


Dick’s style is “mild in manner, strong in argument.” He writes clearly and vigorously. He salts his writing and particularly his speaking with flashes of wit. He is, to boot, generous with his knowledge. Years ago, when I was preparing an encyclopedia article on William Gouge, an early 19th century American writer on banking, I went to ask him if he had any advice. He pulled out of his file cabinet a complete microfilm file he had had made of records on Gouge from the National Archives, for possible publication in an article, and let me keep it as long as I needed. It was like a veteran prospector telling a greenhorn, “Go ahead, here’s my gold vein, and while you’re at it, why don’t you borrow my pickaxe.”


Dick has for some years been retired from the University of Georgia, the last of several universities where he taught. He and his wife, Hildegard, an economist and artist, have five children. Happy birthday, Dick!


Kurt Schuler is Senior Fellow in Financial History at the Center for Financial Stability.