These are radical and misguided ideas. This 2012 study discusses why capital gains taxes should be low or even zero. The study found that the United States already has high tax rates compared to other countries. The U.S. federal‐​state rate on individual long‐​term gains of 28 percent compared at the time to an average across 34 OECD countries of just 16 percent.

A 2018 study by OECD economists provides newer data for 33 countries. One finding is that “all countries tax capital gains on realization,” that is, when assets such corporate shares are sold. Not one of the 33 countries taxes gains on an annual or accrual basis, as Wyden proposes.

The OECD study calculates the combined federal‐​state capital gains tax rates on investments in corporations in 2016, which are shown in the chart below. The calculation includes the corporate‐​level income tax and the tax on individual long‐​term gains.

Since the study, the U.S. has dropped its federal corporate tax rate from 35 percent to 21 percent, so I’ve added a bar in the chart to show the U.S. rate in 2019. The new lower U.S. rate of 46.2 percent is still the 8th highest among the 33 countries. 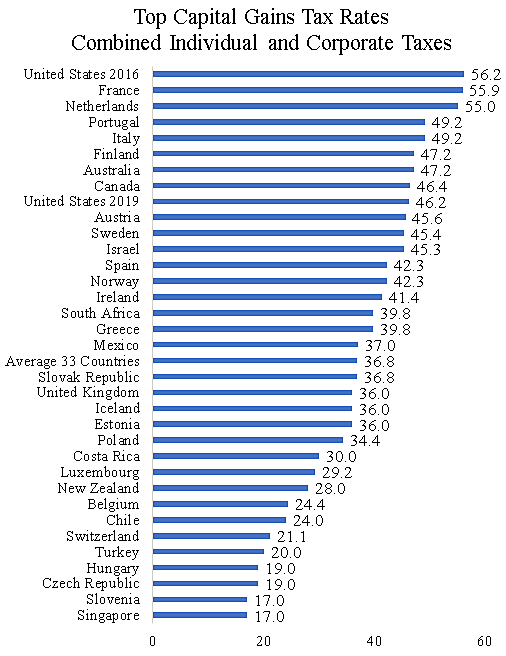