Can We Rely on Inflation Expectations?

The Wall Street Journal has pointed out that in his recent press conference Federal Reserve Chair Ben Bernanke used the words “inflation expectations” (or some variation) 21 times. His argument is that we need not worry about inflation because we will see it coming, and then the Fed will do something about it. Such an argument relies heavily on the ability of inflation expectations to predict inflation. Which of course raises the question, just how predictive are inflation expectations? 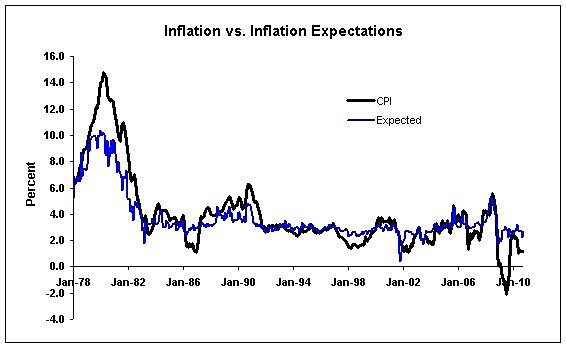 Clearly the two move together. For instance, the correlation between current inflation and expectations is almost 1 (its 0.93), while the correlation between inflation and actual inflation a year later is slightly less at 0.81. The relationship declines as we move further into the future. So yes, consumer expectations appear a reasonable predictor of the direction of inflation. However, they don’t appear to be a great predictor of the magnitude or the frequency of changes. For instance, the standard deviation of actual inflation is about twice that of expected inflation. As one can easily see from the chart, expectations are quite sticky and rarely pick up the extremes. During the late 1970s and early 1980s, expectations did move up, but then never reached the heights actually experienced, nor did consumers ever actually expect deflation during the recent financial crisis (if we are going to base policy on expectations, we should at least be consistent about it). 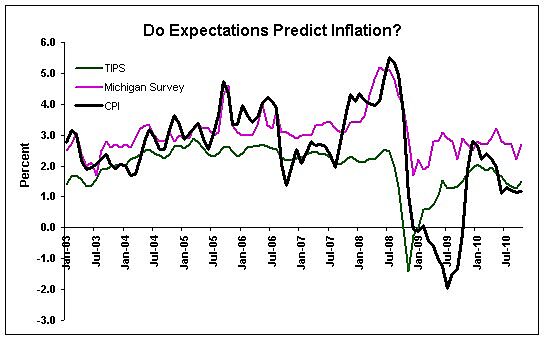 For about the last decade we also have market based measures of inflation, based upon inflation‐​indexed bonds. The TIPS measure tends to be less correlated with actual inflation, but does a better job of capturing the extremes. Although interesting enough, TIPS was already predicting that deflation would be short‐​lived before we even experienced any deflation.


The point is that while expectations are useful for qualitatively purposes, they do not have a strong record of recording the extremes. Given that most of us expect some positive level of inflation, the real debate is over how much. In this regard, either survey or market‐​based expectations are likely to be both a lagging indicator and an under‐​estimate of actual inflation.