Californian lawmakers and labor unions have reportedly reached a deal to increase the minimum wage to $15 an hour by 2022, and index it to inflation after that. If this deal becomes a reality, California would be the first statewide experiment with the $15 minimum wage. The ratio of the minimum wage to the median wage in California would be one of the highest in the world among high‐​income countries. California’s minimum wage deal brings with it unprecedented risks, and any resulting adverse results will be primarily borne by younger workers, people with limited job skills, and people living outside of major cities.


Unlike the recent deal in Oregon, which included a tiered minimum wage with lower levels in smaller cities and rural areas, California’s increase would apply uniformly throughout the state. While major cities like San Francisco or San Jose that generally have higher wages might be able to absorb some of the adverse effects of this increase, non‐​metro areas will be the most impacted by this deal. The New York Times estimates that in 2022 the $15 minimum will be 40 percent of the median wage in San Jose, but 74 percent in Fresno, significantly higher than France and approaching the 77 percent seen in Puerto Rico. Arindrajit Dube, a prominent minimum wage researcher who has found relatively small disemployment effects from past increases, acknowledged that “In rural areas like Fresno, a majority of workers will be affected.” There is also more slack in the labor market in places away from the major urban metros: ten of the thirteen metropolitan statistical areas (MSAs) with the highest unemployment rates in the country are in California, and people in these places will find it even harder to deal with these minimum wage increases.


Another potential pitfall of the new deal is it would effectively lock California into a rigid trajectory for the next six years, which will limit the state economy’s ability to adapt to changing circumstances. With a phase‐​in stretching to 2022, it’s likely that a recession will hit at some point during this period. This could cause wage growth to stall out, which would push up the ratio of the proposed minimum to median wage ration even higher. Even Governor Brown recognized the implicit trade‐​offs in minimum wage increases of this magnitude, warning in his most recent budget proposal that in this scenario “such an increase would require deeper cuts to the budget and exacerbate the recession by raising businesses’ costs, resulting in more job loss.” The Sacramento Bee reports that the tentative deal includes a provision giving the governor the ability to temporarily halt future increases during a recession, but given how quickly Governor Brown has reversed course in the face of pressure from unions and activists, it is hard to see how a future governor would halt increases in the future. 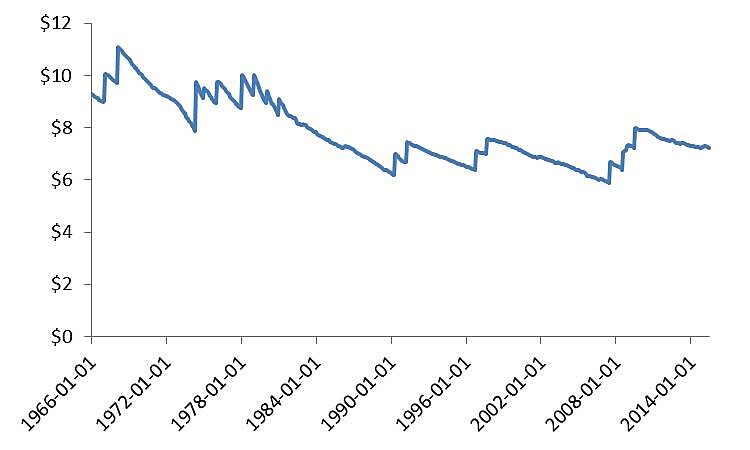 Studies focusing on discrete job levels over a short time frame might be failing to accurately measure where these adjustments are taking place. Jonathan Meer and Jeremy West suggest that the impact of a minimum wage increase is primarily driven by reduced job creation, rather than companies firing people. Over a longer time period, they estimate that a 10 percent increase in the minimum wage leads to a 0.8 percent reduction in total employment, with these effects concentrated among lower‐​skilled workers. California’s much greater minimum wage increase would lead to slower job growth in the future, which would disproportionately harm people at the lower end of the skills spectrum.


With this deal, California ventures into largely uncharted waters for the United States experience with the minimum wage, and the ratio of minimum wage to median wage would be one of the highest in the world. While other cities have passed a $15 minimum, and Oregon recently enacted a significant increase, California would impose uniform minimum wage hikes throughout the entire state, which could especially harm people outside major cities. After reaching $15, the minimum wage will be indexed to inflation, which could lead to disemployment effects larger than many recent studies have found. Young workers and people with limited job skills will bear the brunt of any negative consequences from California’s minimum wage experiment, while rural areas and smaller towns will see the most disruption.