Sanctuary policies on the city, county, and state level are frequently in the news. Opponents claim that they increase crime in jurisdictions while proponents claim that they allow illegal immigrants, their families, and their American neighbors to rest a little easier knowing that the local government won’t help the federal government enforce its immigration laws. Both sides assume that sanctuary policies produce those results by decreasing the scope and scale of immigration enforcement within their jurisdictions that, in turn, reduce the number of deportations from there.


There is suggestive evidence that sanctuary policies reduce deportations but many reasons to also be skeptical of big effects. We decided to look at how the California TRUST Act reduced deportations from California. Governor Jerry Brown (D) signed the TRUST Act in October 2013 – the beginning of the fiscal year for 2014. The TRUST Act was a state‐​level sanctuary policy that limited law enforcement cooperation with ICE unless the arrestee had already been convicted of serious crimes.


ICE deports people apprehended in specific Areas of Responsibility (AOR). There are three AORs that include the states of California and Hawaii. For the purposes of this blog, we assumed that Hawaii was not part of the California AORs. According to the Center for Migration Studies, Hawaii’s illegal immigrant population was under 40,000 in 2015 while California’s was almost 2.6 million. Since Hawaii’s illegal immigrant population was only 1.5 percent of California’s, we were comfortable in ignoring it.

Figure 2 shows the differences in removal trends before and after California’s TRUST Act became law relative to the other AORs that were not covered by the California law. Each regression line fit to the pre‐ and post‐​TRUST Act, called “Fitted Values,” highlights the change from a steady increase in the number of removals from California’s AOR to a precipitous decline in the number of removals when the TRUST Act became law. 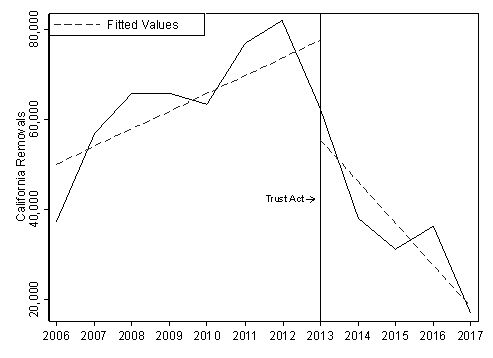 On a statistical basis, these findings are merely suggestive as we only have 12 years of data and we didn’t control for any other factors. For Figure 2, it appears that the more substantive change transpired in FY2012 prior to the TRUST Act. Regardless, this simple exercise strongly suggests that the California TRUST Act caused the number of deportations from California to fall faster than they otherwise would have relative to other AORs.