California Gov. Jerry Brown appears poised to exit office next year with a top political priority in hand: free from the massive budget deficits that had weighed on his predecessors.


… Mr. Brown has been preaching frugality for years—he kicked off one past budget talk with Aesop’s fable about the thrifty ant and the lazy grasshopper.


Mr. Brown took office in 2011 with a $27 billion deficit and drastically slashed spending. In 2012, he staked his governorship on a tax increase that voters approved that year and reauthorized in 2016.

Brown might have been “preaching frugality,” but his high‐​speed rail boondoggle is about as spendthrift as you can get.


As for state deficits, they generally arise when states project high future spending growth even when revenues are stagnating. They have more to do with excessively optimistic forecasts than they do with real gaps between current spending and revenues.


California general fund spending increases have been substantial under Brown, as shown in the chart below using the latest state data.


Spending fell 6 percent Brown’s first year, but then bounced back strongly, rising 46 percent from 2012 to the enacted level for 2018.


During the whole period, 2011 to 2018, general fund spending rose 38 percent in California, compared to an average 27 percent in the other 49 states, per NASBO data.


Total California spending (general and nongeneral funds) has risen 44 percent under Brown, 2011–2018. Perhaps Brown did too much preaching, and not enough actual cutting.


In the Cato 2016 Governors Report Card, I assigned Brown an “F.” Look for another Report Card this October. 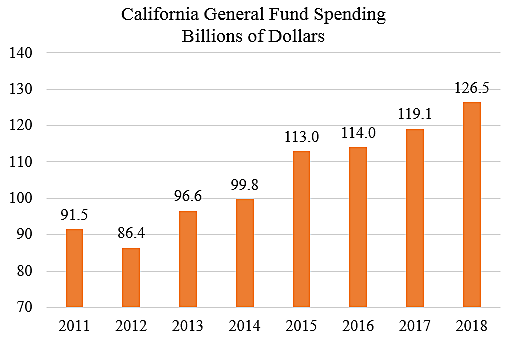