In a July 1932 radio address, Franklin Roosevelt said, “Let us have the courage to stop borrowing to meet continuing deficits. Stop the deficits … Any government, like any family, can for a year spend a little more than it earns. But you and I know that a continuation of that habit means the poorhouse.”

That was a surprisingly sound bit of advice from that particular president. However, after Roosevelt was elected, he helped entrench a new culture of spending and deficits in Washington that triumphed over a traditional approach of prudence and restraint in public budgeting. FDR’s fiscal legacy continues to haunt us today.

New projections show a grim fiscal future and crushing debt burdens on young Americans. The chart shows CBO’s “alternative” projection for federal debt as a share of the economy, per CRFB. The projection may be more realistic than CBO’s baseline because it assumes current tax cuts are extended and discretionary spending caps will continue to be breached in coming years.

Without reforms, federal debt held by the public will rise from 78 percent of GDP this year to 105 percent by 2028. That will be triple the level in the early 2000s. Interest on the debt will more than double as a share of GDP from 1.6 percent today to 3.3 percent by 2028. 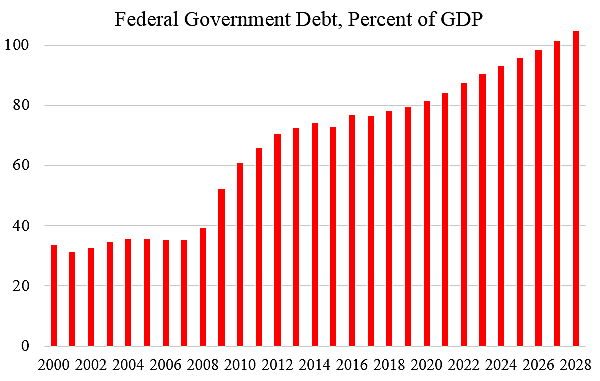 Unless we change course, the rise in debt will send us to the poorhouse. Some economists, such as Paul Krugman, have told us not to worry because “we owe it to ourselves.” That view is completely wrong, as I discuss here. For one thing, we owe about 40 percent of federal debt to foreigners.

But more importantly, trillions of dollars for principal and interest payments will have to be forcibly extracted from taxpayers down the road, which will damage the economy and deprive people of a growing share of their earnings. If rising debt precipitates a financial crisis—as did in Greece, Puerto Rico, and elsewhere—it will impose widespread economic harm in a rapid manner.

Today’s politicians are to blame, but the structural and cultural forces that got us here began more than eight decades ago. The 1930s was the turning point. Federal policymakers embraced “entitlement” programs that put spending increases on auto-pilot, and they began major spending on previously state, local, and private activities. At the same time, Keynesian economic thinking convinced politicians to discard the old view that deficits were bad in favor of the new and false view that deficits stimulate growth.

The irresponsible practice of deficit spending is now deeply entrenched. It appears that only a revolution in voting behavior, budgeting rules, or Washington culture can save us from a fiscal calamity down the road. 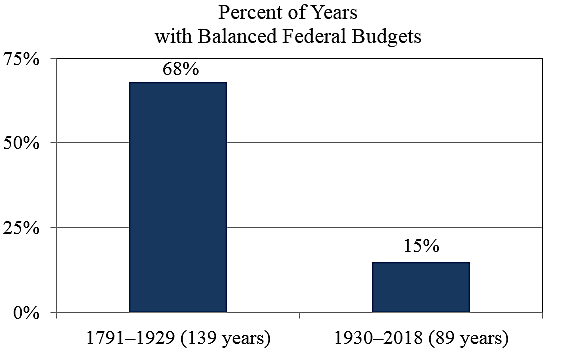 For more on the rise of debt and problems it creates, see here.