The budget agreement between congressional leaders and the Obama administration would break prior budget caps and increase spending over the next two years by $80 billion. The Bipartisan Budget Act (BBA) of 2015 would theoretically offset that cost with savings down the road, but promises of future savings are worth little given that GOP leaders have shown they will break agreed-to restraints whenever the time comes. The Heritage Foundation is right that the deal is a “colossal step” in the wrong direction and “does nothing to reduce the size and scope of government.”

If passed, the deal would undermine a crucial GOP policy plank going into 2016. The issue that unifies all the Republican presidential candidates is the promise of major tax cuts for individuals and businesses. It has been heartening to see so many candidates proposing pro-growth cuts. The Tax Foundation has run the numbers on the plans, and nearly all of them would generate revenue losses for the government and savings for the people.

I’m all for a large tax cut, but how do Republicans plan on passing such a cut if they keep increasing spending? The next president will be confronted with very ugly budget numbers looking forward, thanks partly to the bipartisan profligacy of recent years. Coming into office in 2017, the new president will see deficits exploding to more than $1 trillion by the early 2020s, and $8 trillion more in debt projected to be piled up over the coming decade.

The best pro-growth tax cuts should be enacted regardless of the deficit situation. In particular, a permanent corporate tax rate cut would generate strong economic growth and would not increase the long-term deficit because the corporate tax base is so dynamic. But to cut taxes, the next president will have to convince enough members of Congress to go along, and the higher are spending and deficits, the harder it will be to get moderates on board.

By repeatedly caving into President Obama, Republican leaders are undermining the ability of the next president, if a Republican, to follow though on major tax reforms and stronger economic growth.

The chart below shows total federal spending on programs, and excludes spending on interest, which has been abnormally low in recent years. While current spending is down from the stimulus peak of 2009, it is still substantially above spending during the Bush years, which in turn was substantially above spending during the Clinton years. With the new budget deal, non-interest spending will be about 19.9 percent of gross domestic product (GDP) in 2016, up more than two percentage points from the Bush years.

That may not sound like much, but two points of GDP is about how much the government collects in corporate income taxes each year. If Obama and the Republicans hadn’t splurged on spending in recent years, we would have had the budget room to completely abolish the corporate income tax—a reform that would generate a powerful boom and rising prosperity for all Americans. 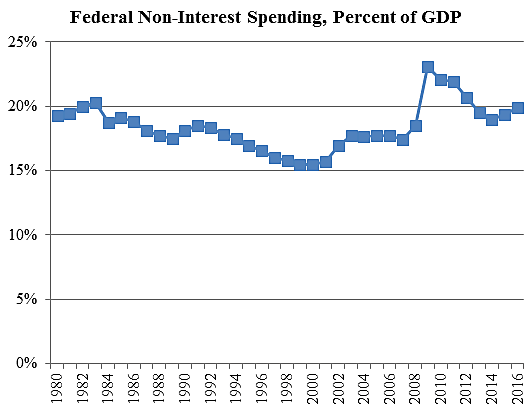 Data note: the 2009 spending spike was not quite as high as shown because recorded TARP spending did not materialize.