Republicans and Democrats have come together on a “historic” budget deal that cuts federal spending by more than $2 trillion over 10 years. The Washington Post’s lead story calls the cuts “sharp” and “severe.”

However, the budget deal doesn’t cut federal spending at all.

House Speaker John Boehner’s bullet points on the deal say that it cuts discretionary spending by $917 billion over 10 years, as “certified by CBO.” These discretionary “cuts” appear to be the same as those in Boehner’s plan from last week. The chart shows CBO’s scoring of those spending cuts (see here and here). 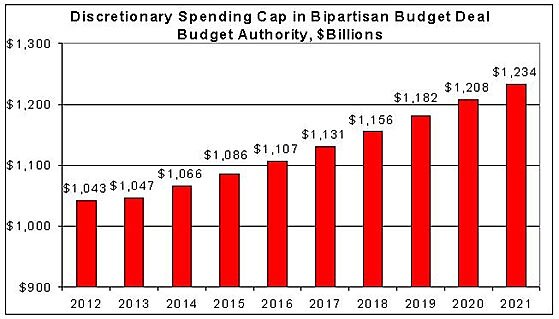 Wait a minute, those bars are rising! Spending isn’t being cut at all.  The “cuts” in the deal are only cuts from the CBO “baseline,” which is a Washington construct of ever-rising spending. And even these “cuts” from the baseline include $156 billion of interest savings, which are imaginary because the underlying cuts are imaginary.

No program or agency terminations are identified in the deal. None of the vast armada of federal subsidies are targeted for elimination. Old folks will continue to gorge themselves on inflated benefits paid for by young families and future generations. None of Senator Tom Coburn’s or Senator Rand Paul’s specific cuts were included.

The federal government will still run a deficit of $1 trillion next year. This deal will “cut” the 2012 budget of $3.6 trillion by just $22 billion, or less than 1 percent.

The legislation does create a “Joint Committee” to design a second round of at least $1.2 trillion in spending cuts by November. Presumably, interest savings will be included in those “cuts” as well, reducing the amount of actual program cuts needed to about $1 trillion.

Will these Joint Committee cuts be real? This deal’s immediate cuts aren’t real, nor were many of the cuts in the 2011 budget deal earlier this year. It won’t be hard by the Joint Committee to manufacture $1 trillion in pretend savings in coming months.