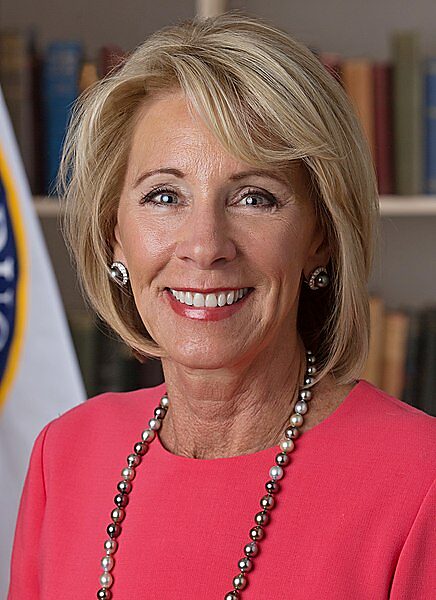 Betsy DeVos resigned last night as U.S. Secretary of Education. She cited this week’s storming of the Capitol, which she wrote was fueled by President Trump’s incendiary rhetoric and was an “inflection point” for her.

Whether DeVos should have left the administration sooner, especially as her boss became more dismissive of electoral reality, may weigh heavily on her legacy. But based on education policy, DeVos’s tenure overall was a good one. Not great – the administration did not work with Congress to substantially shrink the largely unconstitutional federal presence in education – but DeVos recognized federal excesses and launched no grand scheme, like No Child Left Behind or Race to the Top, to enlarge them.

She, of course, also strongly supported school choice, which is absolutely the direction American education needs to go. That said, outside of Washington, DC, military installations, and Native‐​American schooling, education is not within the federal purview. Unfortunately, DeVos did promote a national scholarship tax credit which would not pass constitutional muster and would threaten to inject federal regulations into private schools. But she tried to make it as Constitution‐​friendly as possible, avoiding direct federal funding and allowing states to opt‐​in.

Secretary DeVos also worked hard to protect oft‐​forgotten taxpayers, as well as sometimes dubiously targeted institutions, when it came to matters such as student loans. This earned her a lot of flak, especially her reticence to forgive all of the debt of students who attended colleges found guilty of fraudulent practices. DeVos held that if borrowers had benefited from their education they should not receive full forgiveness. This was an understandably controversial position, but her detractors rarely acknowledged that her motives may have been good: to protect taxpayers, who have no say in the loans, from being the ultimate losers. She also fought for the due process rights of college students accused of sexual misconduct. Again, a difficult stance, but one rooted in basic American principles of justice.

Betsy DeVos had a job that should not exist. She recognized that fact and largely acted accordingly. She also championed school choice and criticized public schooling, which threatened a lot of the education establishment that is omnipresent in DC. Those positions garnered her a lot of sometimes vitriolic enmity, but on the whole hers was perhaps as good a tenure as a constitutionalist, and realist about the often deleterious effects of federal education policy, could hope for after decades of federal expansion.