The rate of broad money growth (M3) in the United States is weak (see the accompanying chart). The ultra‐​low federal funds rate (0.25%) has acted to keep a lid on broad money growth and, in turn, economic activity. Yes, “low” interest rates imposed by the Fed are contributing to a credit crunch and anemic money growth. But, wait. This is counter‐​intuitive. And if that’s not enough, it’s not what the textbooks tell us, either. 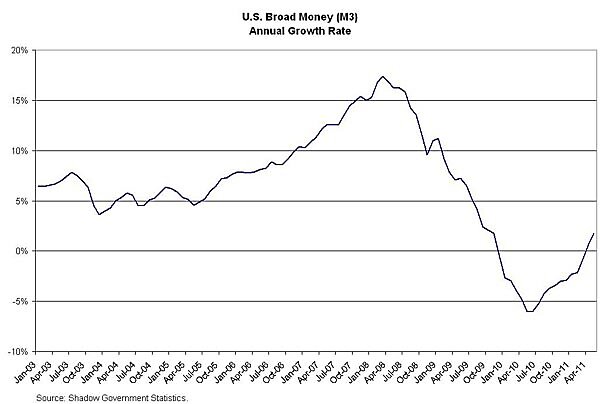 While the Fed has pumped huge quantities of so‐​called high powered money into the economy, the U.S. is paradoxically facing a credit crunch. Banks have utilized their liquidity to pile up cash and accumulate government bonds and securities. In contrast, bank loans have actually decreased since May 2008. And since credit is a source of working capital for businesses, a credit crunch acts like a supply constraint on the economy. Even though it appears as though the economy has loads of excess capacity, the supply‐​side of the economy is, in fact, constrained by the credit crunch. It is not surprising, therefore, that the economy is not firing on all cylinders.


To understand why, in the Fed’s sea of liquidity, the economy is being held back by a credit crunch, we have to focus on the workings of the loan markets. Retail bank lending involves making risky forward commitments. A line of credit to a corporate client, for example, represents such a commitment. The willingness of a bank to make such forward commitments depends, to a large extent, on a well‐​functioning interbank market — a market operating without counterparty risks and with positive interest rates. With the availability of such a market, even illiquid (but solvent) banks can make forward commitments (loans) to their clients because they can cover their commitments by bidding for funds in the wholesale interbank market.


At present, the major problem facing the interbank market is what can be termed a zero‐​interest rate trap. In a world in which the fed funds rate is close to zero, banks with excess reserves are reluctant to part with them for virtually no yield in the interbank market. Accordingly, the interbank market has dried up — thanks for the Fed’s “zero” interest‐​rate policy. And, with that, banks have been unwilling to scale up their forward loan commitments.


But, how can banks make money without making wholesale and/​or retail loans? Well, it’s easy and “risk free” to boot. By holding the federal funds rate near zero, the Fed creates an opportunity for banks to borrow funds at virtually no cost and use them to purchase two‐​year U.S. Treasury notes which yield around 40 basis points. That doesn’t sound like much. But, considering that banks don’t have to hold capital against U.S. Treasuries, their positions in U.S. government securities can be leveraged to the moon. Well, not really. But, at a leverage ratio of 20, a bank can do quite well by playing the Treasury yield curve.


It’s time for the Fed to recognize market realities and raise the federal funds rate. A higher fed funds rate would release the credit squeeze created by the Fed’s misguided “low” interest‐​rate policy. If the Fed boosted the funds rate to 2%, the all‐​important broad money measure — M3 — would get a boost, and so would the slumping economy.