House Speaker John Boehner has revised his budget plan in response to an unfavorable analysis by the CBO. The CBO has examined Boehner’s new plan and finds that it would cut spending by $917 billion over 10 years. Of the total, only $761 billion would be cuts to programs. The rest of the savings would be from reduced interest costs.


Actually, the revised Boehner plan doesn’t cut spending at all. The chart shows the discretionary spending caps in the new Boehner plan. Spending increases every year—from $1.043 trillion in 2012 to $1.234 trillion in 2021. (These figures exclude the costs of wars in Iraq and Afghanistan). 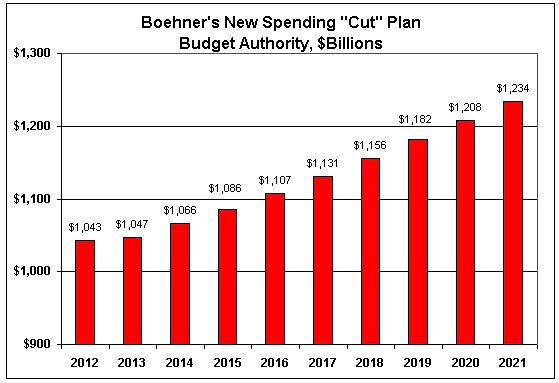 The “cuts” in the Boehner plan are only cuts from the CBO baseline, which is an assumed path of constantly rising spending. If Congress wanted to, it could require CBO to increase its “baseline” spending by, say, $5 trillion over the next decade. Then Boehner could claim that he was “cutting” spending by $5.9 trillion, even though his plan hadn’t changed. You can see that discretionary “cuts” against baselines don’t mean anything.


The way to make real spending cuts is to abolish programs and agencies. But it’s been eight months since a landslide election that focused on the issue of spending cuts, and the Republican leadership hasn’t proposed any major terminations.


Senator Tom Coburn told us exactly where he wants to cut spending in this 620‐​page report. Senator Rand Paul has detailed $500 billion in specific cuts. Where are the spending cut plans of the other fiscal conservatives in Congress?


Members need to step up to the plate and tell us where they would cut the budget. (For help, they can look here). The reality of ongoing $1 trillion deficits is that Congress has to start abolishing programs, privatizing activities, and making other lasting reforms. Promising to reduce spending growth a bit from projected baseline increases won’t do the job.