House Speaker John Boehner is scrambling to revise his budget plan after the CBO found that it would only cut spending by $850 billion, not the $1.2 trillion promised. 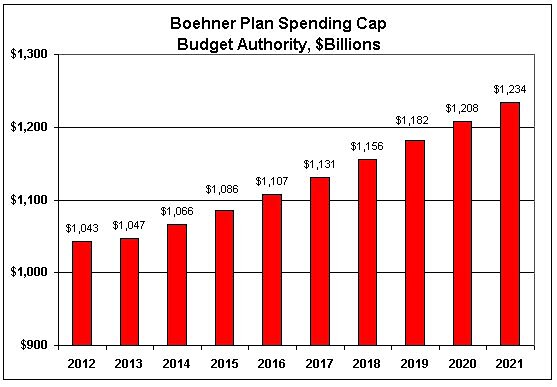 The “cuts” in the Boehner plan are only cuts from the CBO baseline, which is an imaginary path of future spending designed as a planning tool for Congress. Boehner can propose to spend any amount in any future year he wants, and in this plan he choose to have a steadily rising spending path.


The Boehner plan also doesn’t cut spending in a more fundamental way. It doesn’t lay out any particular programs or agencies to terminate. I’m in favor of spending caps as a secondary enforcement mechanism, but actual cuts have to come first. A caps‐​only plan like Boehner’s just kicks the can down the road. At best, it simply nudges future legislators to actually cut something specific.


Why doesn’t the House leadership propose real cuts? They’ve certainly got the resources and expertise to do the job. A single senator — Tom Coburn — produced a 620‐​page report last week detailing hundreds of programs to cut and terminate. Coburn and his staff read through thousands of articles and reports on the real‐​world performance of federal programs, and they made a good case for each particular cut they proposed.


Republican leaders can’t hide behind baselines forever. If they really want a smaller government as they keep claiming, they’ve got to target particular programs and agencies and begin a national debate about terminating them.