Bitcoin Might Not Be Money, but Cryptocurrencies are the Way of the Future

Kevin Dowd, a long-time friend and eminent free-banking authority, set his sights on Bitcoin in the book he published this summer: New Private Monies: A Bit Part Player?.  His work delivers a refreshingly accurate and straightforward assessment of Bitcoin, ignoring the hype which surrounds it.

Both Kevin and I appreciate the importance of cryptocurrencies: in his own words, “The broader implications of cryptocurrency are extremely profound.”  The peer-to-peer exchange structure common to cryptocurrencies like Bitcoin cuts the intermediary out of transactions.  This eliminates the need for a third party in exchanges and protects wealth against exchange controls or capital controls.  Because Bitcoin and other cryptocurrencies are entirely digital, the location of the two parties of a transaction is irrelevant: transactions can be carried out anywhere.  This also makes transactions highly anonymous, a feature appealing to consumers who cherish privacy.

The intermediary-free, digital transactions characteristic of cryptocurrencies such as Bitcoin are an important step towards exchanges free of regulatory meddling.  In addition, this technology should enable low-cost banking accessible to anyone with a cellphone.  Indeed, cryptocurrencies should improve access to financial services in developing countries and elsewhere because they will complement existing services that now rely on standard currencies (see the M-Pesa in Kenya).

There is, however, an important line to be drawn between the future of the technology behind Bitcoin and the future of Bitcoin itself, thanks to its notorious volatility.  Kevin is crystal clear on the distinction:

“Though the supply of Bitcoin is limited, the demand is very variable; this variability has made its price very uncertain and created a bubble-bust cycle in the Bitcoin market.  Perhaps the safest prediction is that Bitcoin will eventually be displaced by alternative cryptocurrencies with superior features.”

I couldn’t agree more.  The uncertainty (read: volatility) of Bitcoin speaks for itself in the accompanying chart.

As a supporter of cryptocurrencies, I only disagree with Kevin on one basic point. We are both well aware that volatility is Bitcoin's great weakness.  I, however, also believe that Bitcoin’s volatility proves that it is a speculative asset, not a currency.  Thanks to its volatility, Bitcoin is unreliable enough that it is useless as a unit of account.  A unit of account is a well understood measurement for defining and comparing the values of goods, services, or purchases.  This is a crucial qualification of money.  Due to its volatility, Bitcoin fails to be a reliable unit of account.  It cannot be considered a money or currency.

While we might differ on whether Bitcoin should be classified as money, Kevin and I agree on one big thing: expect many more innovations and improvements from cryptocurrency technology.  Do not, however, hope for the same from Bitcoin. 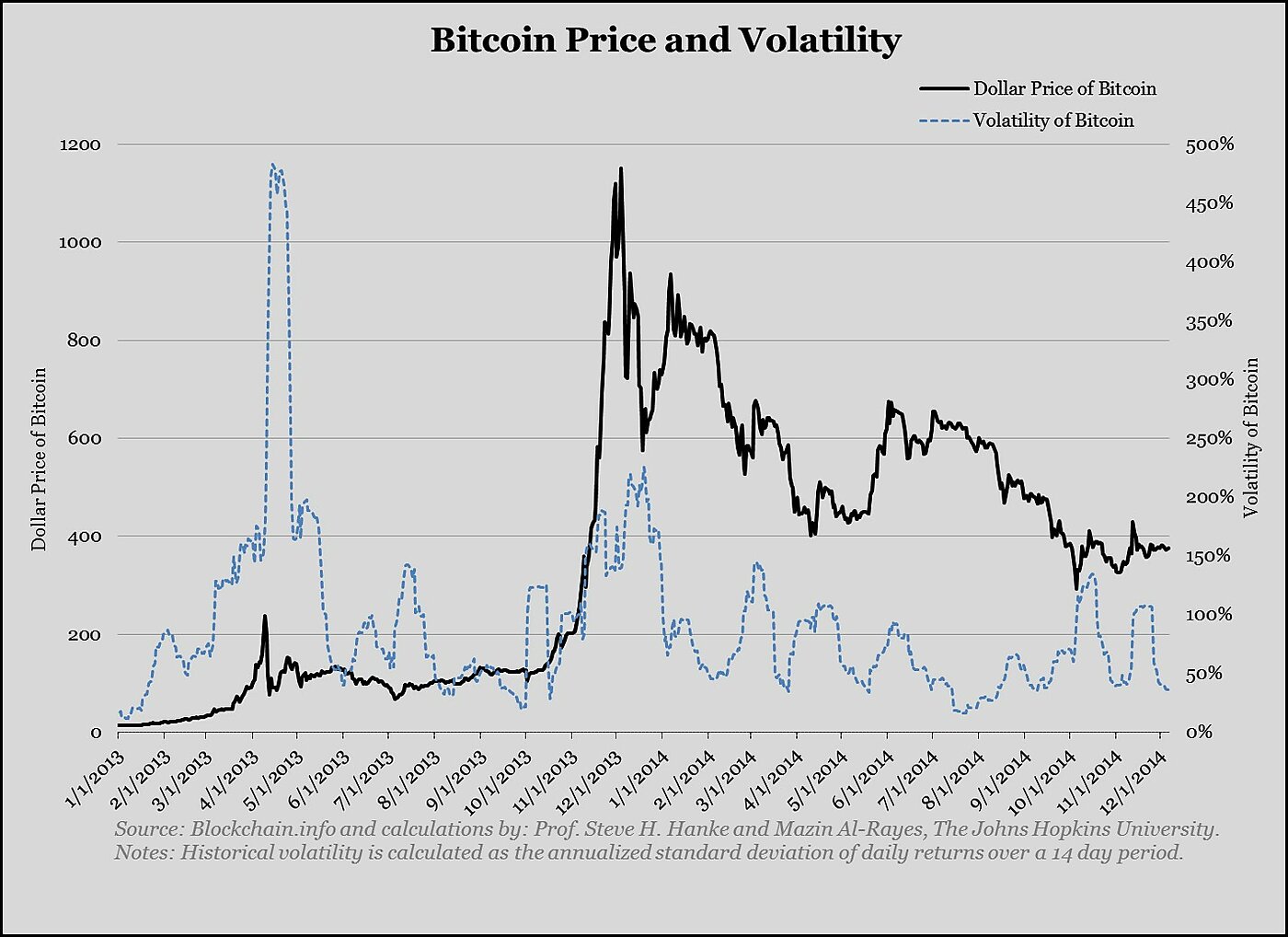 This blogpost was co-authored by Connor Kenehan.