If you ask just about anyone at Cato what is the biggest problem we face, they will say big government, particularly the vastly overgrown federal government. Gallup finds that many Americans agree with us.

The country’s No. 1 problem in the year that just passed was its government, according to a new survey. The Gallup poll found for the second consecutive year, more Americans identified Uncle Sam as the “most important problem facing the United States” than any other issue. An average of 16 percent of respondents selected government, followed by 13 percent who said the economy, 8 percent who chose unemployment and 8 percent who selected immigration.

Aside from having a dim view of the president and Congress, people are presumably responding to the fact that Uncle Sam is so damn dysfunctional. While we are overloaded with news on ISIS and the economy, Americans may also be aware that the Secret Service has been making a joke of itself, Veterans Administration officials have been lying and cheating regarding the agency’s long wait lists, and the IRS director has been so dishonest and derelict in his duties that even mild-mannered George Will called for impeachment.

Those are some of the recent scandals, but federal government dysfunction goes much deeper. I describe the five fundamental reasons for federal failure in this recent study. And I discuss dysfunction in numerous federal agencies here.

Here are the Gallup results, courtesy of GovExec: 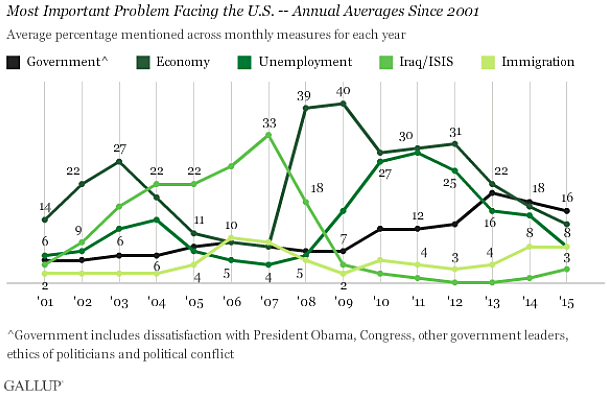