Just before last weekend’s Democratic debate, Bernie Sanders finally released the long-awaited plan for his health care proposal, which would fundamentally transform the health care sector by replacing all health insurance with a single program administered by the federal government. Michael Cannon has ably explained how Obamacare was really the big loser of the back and forth at the debate, but it’s worth looking further into Sanders’ outline of a plan. At just seven pages of text, it leaves most of the major questions unanswered. It does list a bevy of tax increases that it say will finance the needed $1.38 trillion in new federal spending each year, although even this is a significant underestimate. Bernie’s plan promises universal coverage and savings for families and businesses without delving into of the necessary, and often messy, trade-offs.

While he calls the plan ‘Medicare for all,’ the plan would actually cover even more services than Medicare and do away with the program’s cost-sharing components like co-payments, deductibles, and premiums. Giving people comprehensive coverage of “the entire continuum” at little cost to themselves would seem to significantly increase utilization, which would strain the system’s capacity while also rendering it unaffordable. The plan makes no effort to answer fundamentally important questions: How would the new system determine payment rates for health care providers? What, if anything, would it do to try to rein in the growth of health care costs?

The “Getting Health Care Spending Under Control” section of the plan is one paragraph long and offers little beyond assurances that “creating a single public insurance system will go a long way towards getting health care spending under control” and under Berniecare “government will finally be able to stand up to drug companies.” That this is hardly a comprehensive plan and gives the impression that in this system, cost control measures would somehow be painless.

The topline estimate in the plan is $1.38 trillion per year, and a memo provided by Professor Gerald Friedman gives some additional details, claiming the plan would need $13.77 trillion in new public spending from 2017-2026. As Avik Roy has pointed out, that estimate fails to account for the trillions in government spending at the state and local level that will have to be replaced under Berniecare. The figure below gives some sense of how much spending comes from sources other than the federal government. Even after Obamacare significantly expanded the federal government’s role in the health care, spending by the federal government only accounts for about 28 percent of national health expenditures. Under Berniecare, the federal government would be the only payer, and thus would have to replace much of this other spending, including the 17 percent that is currently financed at the state and local level. 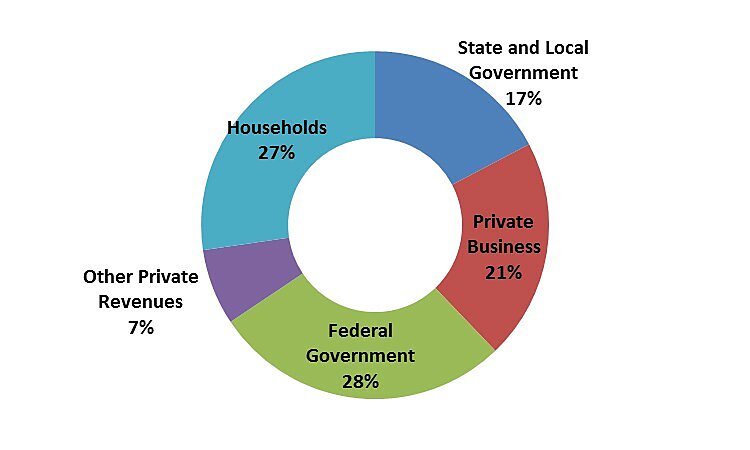 Professor Friedman’s memo also reduces the tab of Berniecare by simply assuming massive savings that would reduce costs below the current baseline: $4 trillion from the assumption that the recent health care cost slowdown will continue and another $6.31 trillion in additional savings from moving to single-payer. Given the lack of details in the cost savings section, these are far from certain, and it seems more plausible that comprehensive coverage with minimal cost sharing would increase utilization and expenditures. Berniecare would cost significantly more than the roughly $13.8 trillion cited in the outline.

The plan gets into more detail in an area Bernie is more comfortable, proposing significant tax increases on businesses and high earners: a 6.2 percent income-based health premium paid by employers, a 2.2 percent income-based premium on households, raising the marginal income tax rates for high earners, and taxing capital gains and dividends. These are just some of the increases he would propose. As discussed above, even this raft of significant tax increases would only finance part of the increased federal spending needed, so Berniecare would still add trillions to the debt.

This plan, like most proposals put out by presidential candidates, oversells the benefits and avoids wading into details that would reveal any trade-offs or costs, leaving the most difficult questions unanswered. Even under optimistic assumptions, the trillions in new taxes would not come close to covering the increased expenditures. If a plan promises to cover everything for everyone without any kind of trade-off, it probably can’t.