After Monday’s acquittal of Lt. Brian Rice in the ongoing Freddie Gray saga, lead prosecutor Marilyn Mosby is batting a perfect 0–4. The three previous defendants were similarly acquitted, with two (and perhaps three) more officers to take the stand in the future.


It appears that Marilyn Mosby’s prosecutions have been politically motivated and without foundation. The big problem, however, is that Freddie Gray has taken the focus off of Baltimore’s long and painful economic plunge – a plunge that can be laid squarely at the feet of Charm City’s long embrace of anti‐​market economic policies.


My colleague, Prof. Stephen J.K. Walters, and I wrote about this in the Investor’s Business Daily on April 22, 2016: “One Year After: Freddie Gray and ‘Structural Statism’.”


Here is some of what we wrote about how the path of structural statism has contributed to Baltimore’s poverty and associated problems.


Little wonder that throughout his life, Mr. Gray had never been legally employed. Nevertheless, friends and family considered him “a good provider,” according to The Baltimore Sun.


This was because he worked in the drug trade, which filled his city’s economic vacuum. An average day on the corner can yield take‐​home pay ten times that available in the low‐​skill warehousing or service jobs sometimes available to high‐​school dropouts like Gray.


The catch, of course, is that such rewards carry two great risks. The lesser of these is regular involvement with the justice system. Gray was arrested 18 times and served three years behind bars in his tragically brief life.


Far more dangerous is how competition works in illegal markets. When selling contraband, one does not pursue market share by advertising high quality or low prices. Sales are increased by acquiring territory from rivals, often violently.


In Freddie Gray’s demographic, then, the homicide rate was 450 per 100,000 — higher than the peak U.S. combat death rates recorded in the wars in Iraq and Afghanistan.


The prevailing narrative is that all this is a by‐​product of structural racism and exemplifies a society “built on plunder” (according to the celebrated black radical Ta‐​Nehisi Coates). This is a myth.


It is not that racism doesn’t exist but rather that it is relatively constant. When explaining variations in economic and social outcomes, constants have little power.


It’s the application of destructive public policies that explain why neighborhoods like Gray’s Sandtown‐​Winchester are deprived. If one had to put a label on this malignant force, it might be structural statism: an addiction to market‐​unfriendly governmental approaches to every problem.”


Stay tuned: with several trials still to come, we’re bound to hear more about the Freddie Gray Sideshow, even as Baltimore’s plunge into poverty – and its causes – goes unnoticed. 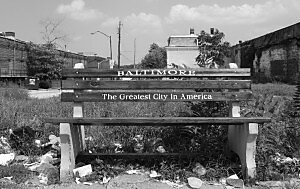