Balkanization and Immigration in America

One common critique of immigration and multiculturalism is that it will cause Balkanization in the United States. Usually, the evidence that purportedly shows Balkanization in America is underwhelming.  Real Balkanization, in the Balkans, quickly led to terrorism, civil war, genocide, and some of the uglier nationalist movement of recent centuries.  By comparison, there is hardly any ethnic separatist nationalist terrorism in the United States inspired by immigrant groups or their descendants.

The best example of ethnic separatism from a migrant group is terrorism caused by Puerto Rican socialist-inspired nationalists who demanded independence for their island. From 1970 onwards, Puerto Rican terrorist groups like the United Force for Armed Independence (FALN), Armed Forces of the Popular Resistance (FARP), People’s Revolutionary Commandos (CRP), Patriotic Anti-Annexation Committee (COPAAN), Organization of Volunteers of the Revolution of Puerto Rico (OVRP), the Macheteros, and others carried out 232 attacks, killed 15 people, and injured 115 (Chart 1).

The most notorious and brutal of the FALN’s terrorist attacks was the bombing of Fraunces Tavern on January 24, 1975, that killed four innocent people and injured about 50 others.  Eventually, many FALN members were apprehended as Bryan Burroughs expertly documents in his Days of Rage and the rest of the violent nationalist movement petered out.  According to the RAND Corporation and the University of Maryland Global Terrorism Databases (through 2014), the last reported attack by Puerto Rican nationalists was on that island in 1998.  Their datasets exclude the attempt on President Truman’s life in 1950 and the armed attack on the House of Representatives in 1954. 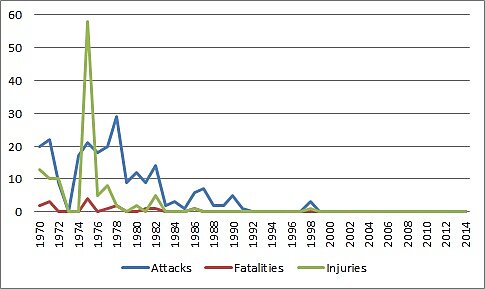 The Puerto Rican situation is distinguishable from immigrant-produced Balkanization – Puerto Rico was densely populated and conquered by the United States in 1898.  Puerto Ricans who remained on the island did not immigrate to the United States but were forcibly integrated and governed from abroad for a while.  Such situations rarely lead to assimilation in the way that immigration does.  Many of the bombings recorded occurred on the island, although the deadliest ones were on the U.S. mainland.

Chicanos, mostly Mexicans in the American southwest, were the other big group of immigrant-inspired separatism.  The insignificant number of terrorist attacks committed by self-described Chicano separatists and nationalists show just what a small movement this was (Chart 2).  They committed a total of 39 attacks that were mostly bombing, killed two people, and injured four.  The last such attack was in 1975. 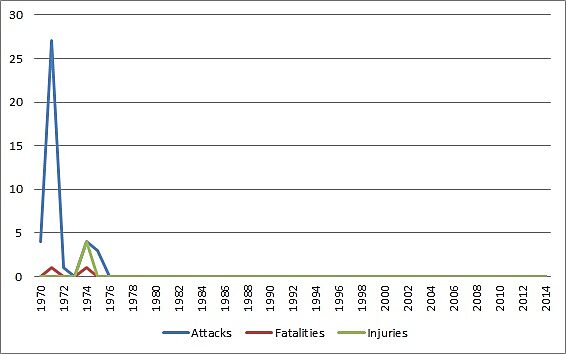 The United States conquered the American southwest from Mexico like it conquered Puerto Rico from Spain.  Territory won in the Mexican-American War of 1846-48 formed the states of California, Nevada, Utah, Colorado, Arizona, New Mexico, and parts of Texas, Oklahoma, and Wyoming.  Why didn't that occupied territory produce more terrorism?  First, there weren’t many Mexicans living in that part of the country at the time – a mere 80,000 by most estimates.  Second, they concentrated in just a few areas.  Third, they were quickly overwhelmed by settlers and immigrants who were not Mexican.  Fourth, the 80,000 Mexicans were immediately granted American citizenship although segregation persisted in some parts of the Southwest into the mid-20th century.  Fifth, Mexican immigrants from Mexico who don't have many grievances arrived after the war and overwhelmed the small numbers of descendants of the Mexicans who were conquered in 1846-48.

Other groups besides these ethnic separatists are responsible for the greatest number of attacks (Chart 3), the most fatalities (Chart 4), and almost all of the injuries (Chart 5).  The 1993 and 2001 spikes for injuries are for the first and second attacks on the World Trade Center.  The 1984 spike is from a bioterror attack in Oregon in 1984 where the Rajneeshee cult deliberately spread salmonella by contaminating salad bars. 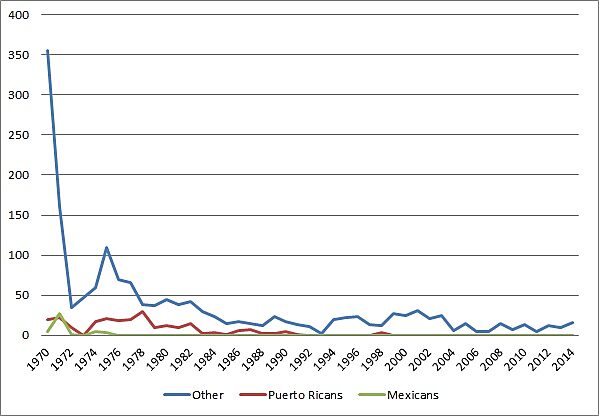 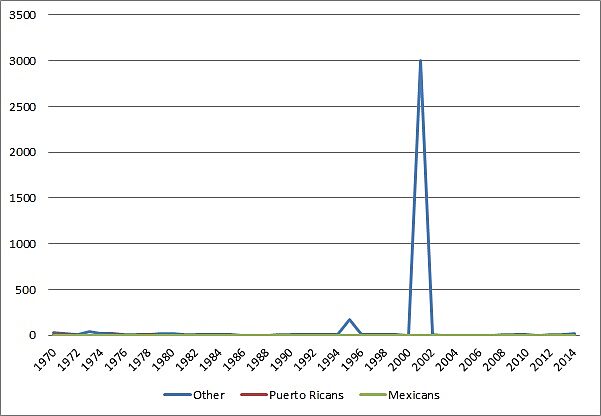 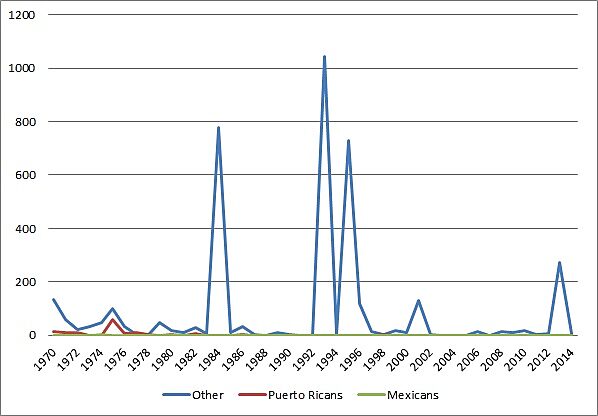 The most obvious groups excluded from this post are Islamic terrorists, white separatists and supremacists, black separatists, and various left-wing terrorist groups like the Weather Underground that were active in the late 1960s, 1970s, and into the 1980s.  Many of these groups require a different framework as they aren’t really ethnic separatists nor are they recent immigrant or migrant groups.  I’ll address many of these other groups in future blogs or papers.  Terrorism committed by ethnic separatists and independence movements is relatively rare in the United States.